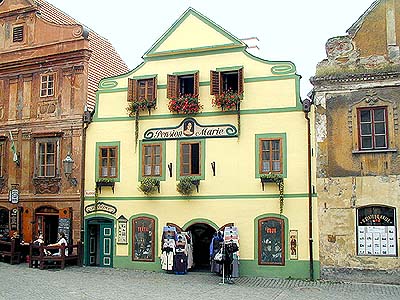 Description of the Building:
A one-storey building with a Classical volute gable with a tympanum which has a flat facade. Only the tympanum is separated by a cornice. The two-aisle layout contains not very remarkable sections mostly with flat ceilings. Only the small rooms are vaulted. The ground floor of the front aisle is vaulted to the transverses. The rear wing has one storey, the left one has only a ground floor. Between the front part of the house and the back wing is situated a small yard where terraces of both house wings are directed.

Architectural and Historical Development:
The building on the land parcel is clearly of Gothic origin. The oldest part of the present house is the back wing with a Gothic portal. A blacksmith´s used to be here in the 15th century. The front building was probably of Rennaissance origin, but it was changed during reconstruction during Classicism (especially the facade). The right part of the back wing is probably of Baroque origin. 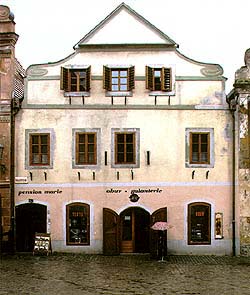 History of the House Residents:
The first documented owner was a blacksmith Hanuš, who left the house for an unknown reason, went to the Monastery in Zlatá Koruna, and willed all his property to the monastery. The further mentioned owner was Pavel Hoch and after his death in 1512 a Rosenberg chancellor Václav z Rovného, who sold it in 1513 to a butcher Ondrášek. In 1522 the house belonged to a blacksmith Jan, whose widow Voršila took over the house and the trade. She sold the house in 1543 to a tanner Ondřej and lived there until her death. In 1550 Ondřej sold the house to a blacksmith Řehoř. Further blacksmiths lived there and ran their trade until at least 1613. Also in the half of the 17th century are mentioned blacksmiths and farriers in the house. From 1652 the house belonged to a blacksmith Jan Pesenreiter and from 1686 to the first half of the 19th century stayed several generations of blacksmiths Kloyber or Klieber.