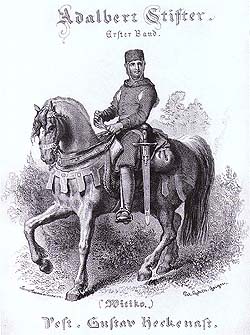 The Vítkovci belonged to the most significant and the oldest Czech families which settled the region of South Bohemia. The founder and the forefather of the family was Vítek of Prčice. His descendants founded a number of other significant Czech noble families, as the Lords of Krumlov, the Rosenbergs, Lords of Hradec, Landštejn and Třeboň, Stráž, Sezimovo Ústí or Úpice all originated from the family of Vítkovci. The Vítkovci founded the Rosenberg castle in the Český Krumlov region around the year 1250, around the year 1253 they founded the Český Krumlov castle and in 1259 the monastery in Vyšší Brod. (see "Division of the Roses").

Sometimes are lords of Stráž and lords of Sezimovo Ústí being associated into just one family branch of lords of Stráž and Ústí with symbol of blue or black rose at golden field. Some verses of legends about coat of arms and reality analyses and compares an article Image of "Partition of roses".