Another Latránská gate that guarded an entrance to Latrán from Staré Město (the Old Town) was situated near the Lazebnický (Barber's) bridge. The first evidence of this gate goes back to 1459. Originally it was a one floor tower building with a painting of an Austrian female eagle with the legend "Stadt Latron" (Latrán Town) between the windows. The legend was to serve as a reminder that until the middle of the 16th century two independent towns were situated on the territory of today´s Český Krumlov - Staré Město (the Old Town) and Latrán. In 1555 Wilhelm von Rosenberg united these two towns. This gate was demolished in 1835 during a reconstruction of the Lazebnický bridge that was seriously damaged by ice floes in 1830. 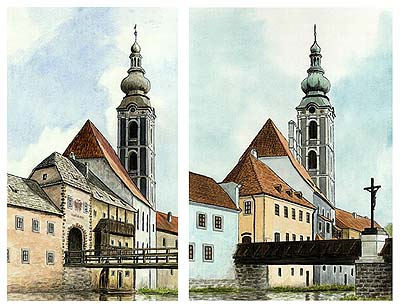