Constructional and Historical Development in Pictures

Český Krumlov was protected by two Kájovská Gates from the south which were reciprocally connected with city-walls.

Originally there probably stood only city-walls and two gates, connected together with the wall. Outer Kájovská Gate was supplemented with draw-bridge which fitted to the stone bridge when was opened. To inner side of city-walls were built houses already in Gothic. Later the wall was built between connecting walls in front of Inner Kájovská Gate. Later the space was rooved and outhouse arose. 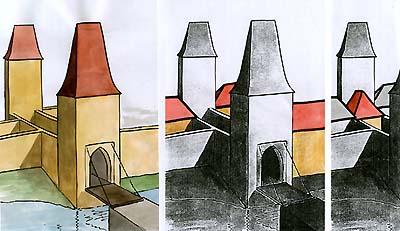 It stopped the existence of draw-bridge of Outer Kájovská Gate in first half of 18th century at the latest. Solid stone bridge, where the draw-bridge was fitting, was built right to the gate. Protracted bridge was covered with small houses that connected straightly to Outer Kájovská Gate. There took place many constructional changes after raising and enlarging of bank at the gate in the beginning of 19th century. Stone bridge and houses on were partly hidden in surrounding terrain and partly covered with newer buildings. Pictures from that time show us two reciprocally united houses, connected to the gate not only from the front but also from the side. 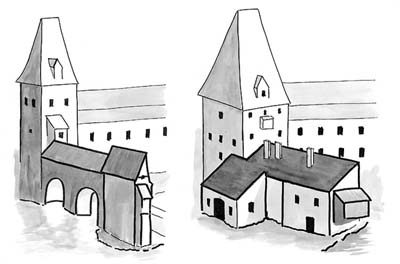 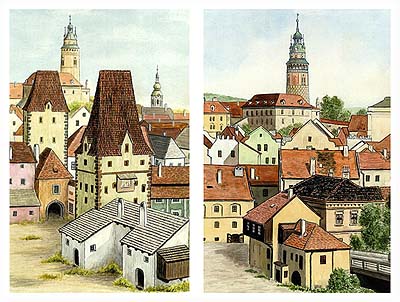 And what about the remainders of gates and fortification nowadays. There are preserved original wall of Inner Kájovská Gate and walls of surrounding houses. The imprint of this gate could be seen on the wall of Kájovská No. 62 where is side wall of outhouse (wall with mouldings and windows on the photo) and also walls of the gate (bare wall). Part of side wall of Outer Gate is also imprinted on house Kostelní No. 169. We can compare present-day photography with black and white reconstruction of the gate and surrounding houses.

From Outer Kájovská Gate are preserved only part of bases in the cellars of house Kájovská No. 59. Masonry above level of terrain disappeared during rebuilding of the house in the end of 19th century when houses Kájovská No. 57 and No. 59 got their present look.

This page was created under sponsorship of Hotel Vltava