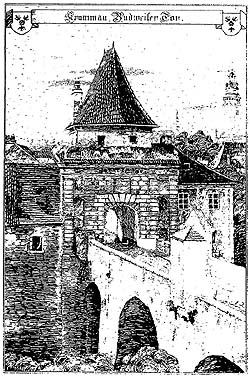 The Budějovice Gate is one of the nine city gates preserved up to the present time. Based upon a donation of Peter Wok von Rosenberg, the gate was erected by the Italian architect Domenico Benedetto Cometta of Eckthurn in 1598 - 1602. Having two floors and four sides, the tower's appearance rather resembles northern Italian citadel architecture with its face covered with a huge rampart and battlements on top. Its inner side is decorated with frescos and has a sun dial at the second floor level. If we would take a short walk from here towards the brewery, there is another remains of a previous city fortification - a 16th century bastion which is the only preserved edifice of its kind in town.