Water slalom became popular in South Bohemia after World War II. The first race took place in the town of České Budějovice on Plánský weir located in the suburban area Rožnov in 1949. However, water slalom needed courses requiring a lot of effort and ability. They needed courses similar to those on Alps rivers. Some parts of the Devil´s Streams seemed to be suitable. Although every boating man is sure that the Vltava river is not passable for sports boats from Lipno to Vyšší Brod. It was also mentioned in the boating kilometrage regarding all Bohemia rivers. It is caused by the canyon which descends for about 150 metres at a 10-kilometre extend. While Lipno Reservoir was being built, Kristian Majer, a body and soul boating man, attempted not to bury the Devil´s Streams for good. He discovered the calmest length of the Devil´s Streams near the sawmill of Loučovice. In the autumn 1953 he had an idea to put on the water slalom competition right there. The water slalom course was called the Devil´s Streams. 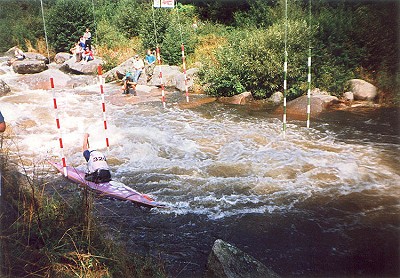 The first annual of the Devil´s Streams water slalom was run on Sunday, 26 September 1954. Water group TJ Tatran Loučovice organized the race, and twenty-nine contestants entered the competition. The whole national team entered, too. The course was 400 metres long. The slalom race took place over a course consisting of seventeen gates. Every contestant had to cover it twice. The better time was counted . František Peterka of Plzeň was the first to cover all the gates. Zdeněk Valeš of Plzeň won the race ( category F1 ). The category used to consist of kayaks but does not exist any longer. The tradition has not been stopped since then. On hundred and thirty contestants entered the race in 1957. MUDr. Zdeněk Matějovský went down the Devil´s Streams from the cascade of Loučovice to the pulpit of the Devil´s Wall in 1957. Czech Republic Championship was held there (the cascade below the paper-mill) in 1958.

In 1959 there was Czech Republic Championship - in the giant slalom competition (Lipno dam) and water slalom competition (the cascade of Loučovice). In 1961 sixty-one boats entered the giant slalom race (Lipno dam) and only forty-six boats finished. The slalom course became the most difficult racing course in the country, and it was also classified among the roughest water in Europe. A high quality course and very good organization persuaded foreign experts to put on water slalom World Championship on the Devil´s Streams on 6-9 July 1967. Two hundred and twenty-seven contestants from 14 countries entered the race, and 15,000 satisfied spectators came to the race on 8 July 1967. Lída Polesná was the first to finish the race and won a gold medal. She lived and worked in Lipno. When the race was over, she said: She had tears of joy in her eyes because she won. 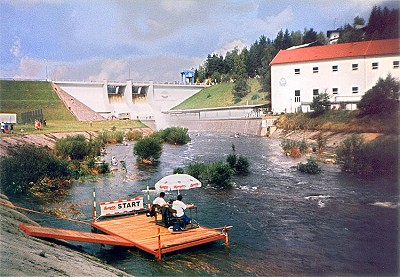 Olympic events have included water slalom since then. Important and world championships were replaced on to canals. Anyway the Devil´s Streams are full of water and boating men every year. They look forward to the race because the course ranks among the most beautiful and difficult water slalom courses in the world.