Last Rafts on the Vltava River

On July 5, 1971 the final preparations for the floating of the last rafts down on the Vltava river took place, so that the necessary documentation could be obtained by the Forestry and Hunting Museum Ohrada - Hluboká and also the former Czechoslovak television.

On July 9, 1971 before seven o'clock in the morning, six old experienced rafts-men set on their way, under the leadership of Bohumil Sypal, on a journey that was to take three days and was connected with navigating 20 locks on the Vltava weirs. Help was also provided for them by two experienced rafts-men from the Vltavan association from Praha. Three of the rafts-men had an old licence, so-called "vrátenský patents". 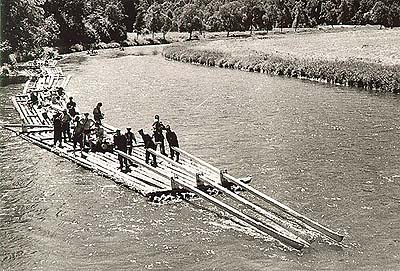 They hoped to travel the first day Vyšší Brod - Rájov, the second day Rájov - České Budějovice and the third day after the rafts were transported by lorries over an un-navigable section of the river to Hluboká nad Vltavou, then again on water to their final destination of Týn nad Vltavou. The Water Department from the Lipno dam, together with the local power station, were letting water out of the dam in Vyšší Brod from the levelling chamber, since five o'clock on that morning, 30 cubic metres of water, which was estimated would be sufficient to raise the level of water for floating down and over all sluices in the weirs on the river. But it turned out, that after such a long time of quiet on the waterways, the river prepared several traps and tricks, which in the end were too much both for the organisers of the last journey of rafts and also the old rafts-men. The bed of the Vltava river had changed significantly, new shallow places were formed and even locks were not always good for navigation, because maintenance had not been carried out for a long time.

Apart from the rafts-men the team of people on the rafts came from the organisers, television staff, their friends and local courageous people. The rafts and their teams apart from several "wettings" in the locks during the first day, came into difficulties and in the mentioned conditions it was not easily possible to lead a group of six rafts with a total length of 120 metres. Many spectators were standing on the banks and bridges of the river, which gave them an unforgettable attraction. Beautiful summer weather accompanied this trip of rafts . It was accompanied also by number of photographers and cameramen. During the journey the rafts sometimes got caught in shallow water, or the ropes connecting the rafts broke, and delay occurred in the programme, and the rafts went through Český Krumlov after six o'clock in the evening where number of spectators were waiting for them. Even that day, the rafts got stuck on a stone before Rájov, where the whole rear section was torn off. They managed to repair it and the rafts reached their finish of the first day in Rájov, where the team spent the night. On Saturday, July 7, 1971 the rafts continued on their journey with their guests, cameramen and photographers through Zlatá Koruna towards České Budějovice. During the navigation of the old Pozděradský weir, the first raft hit the bank, and the rear raft was taken by the current vertically across the river and here it got caught and broken up. There were many dramatic and comical situations during this journey, for example with the well know actress Jiřina Bohdalová. She took part on this journey, so that a cameraman of the Czechoslovak Television could film her conversation with the rafts-men on the water. The organisers terminated this journey on the Vltava river earlier, the second day in the evening in Březí.

It was still possible to get both sufficient valuable film and photographic material for the archives and material to use in television and publish in the press. The older rafts-men were in the end overcome by the power of the river, but they obtained praise and acknowledgement from all, who were lucky enough to be the witnesses to this historical journey of rafts.