In French in 1116 changed the Cartusians water mill into hammer, which was also called the "self-forge". As the time went, water wheels were being used in hammers more frequently. The oldest written record about the hammer in Bohemia comes from year 1350, when king and emperor Karel IV. gave to Tepelský monastery right to pursue the hammer in Hroznětín in region Karlovy Vary. Mojmír Maršál writes that water hammers spread around Europe and established mainly the Cistercian monasteries, in which can be even today found description of hammers and used technologies. One such a description documents: "Hammers or self-forges were the great hammers or mares used for forging of steal, motored by a great water wheel." 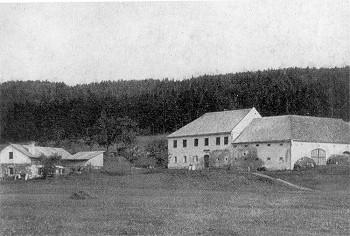 The oldest local names in Vyšší Brod are even Hammerleiten and Hamerleinbach, what is a brook, called back in 1259 Wlitawitz minor and today it is known as Vltavice the Smaller. More often it is called even today Hamerský brook. Hammer in Vyšší Brod in the 16th Century mentions dr. Gustav Hofman as well as J. Majer and for Annalists from Vyšší Brod it was mainly professor dr. Valentin Schmidt. From years 1571 and 1586 come written documents about "hammer near the monastery beside the monastery wall. "The entry from the year 1571 shows, that Ambros Preininger "died at iron-mill. "After him here stood as hammer-smith Mathes Preninger, probably son of Ambrož, though there were several citizens called the Preiningers in Vyšší Brod, at least Zacharias from today's house No. 38 and Simon from today's house No. 41. Mathes Preininger is introduced to us as a hammer-smith around the year 1590. 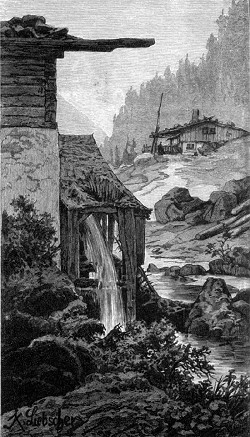 After him became a hammer-smith Hans Ruesamtmuller, which in the year 1601 also "died at iron-mill." This iron-mill was evidently during thirty years' war closed down, because in the year 1643 is recorded at it Michel Preinfalk, "weaver from iron mill." Already the former iron-mill in the year 1711 bought Kaspar Gabst, cook from monasterial convention and his family is here commemorated until 1827. House of the Gabsts (so former iron-mill) in the year 1772 got No. 106 and in the year 1890 it was demolished. Second iron-mill in Vyšší Brod on Hamerský brook, which has been denoted since 1772 like No. 109, survived its "rival." First record about it comes from 10. March 1594, though its origin reaches deep into sixteenth and probably until fifteenth century. On 10. March 1594 sold the iron-mill a widow Katherina Frischmutová to abbot Michael Fabritus, who became the 25. abbot in Vyšší Brod in the year 1591. Her late husband was the hammer-smith and used to be called Michael. Since this time has the iron-mill called the "monasterial." About fate of the iron-mill behind thirty years' war we don't know hardly anything, probably for absence of the "iron breasts" it was out of order.

In years 1643 and 1653 however it certainly laboured and "iron-mill smith" Michael Preinfalk supplied his products in the year 1653 to five smiths in Vyšší Brod. There is another fifty-year gap in names of Vyšší Brod smiths and only in years 1712 and 1713 is here commemorated hammer-smith Paul Holzer, in the year 1721 was here the hammer-smith Jakob Groppl. On 9. January 1746 burned down at an iron-mill the habitation of smith, but iron-mill worked on, because in records from year 1753 this iron-mill is presented as "tool-making workshop." In the year 1772 is here for the first time commemorated the smith family the Stumpners by Georg, who to this monasterial iron-mill came probably as a journeyman. He had spent here also years 1780, 1787 and 1803, so 31 years straight. After him came Johan Stumpner, who is first noticed in the year 1818. About nine years later, in the year 1827, here was the smith another Stumpner Jacob. In the year 1848 shows Sommer, that on this iron-mill work four smiths.

Working day on iron-mill began already before fifth o'clock in morning, when the follower made a fire in furnace and inserted in it the iron clods heavy about half of steelyard (25 kg), to warm it. At six got on smith and journeymen. They were working from Monday to Saturday till seven clock evening. The heating was done by wooden coal, which manufactured the coal merchants not far at the Uhlířský hill. Product of the iron-mill was above all flat irons and poles, so-called štáfy and šíny. From one clod could smith forge ten products. The fundamental arrangement was hammer uplifted by water-wheel. Iron-mill worked seasonally according to orders, sufficient stock of iron, and copper clods, water and wooden coal. For cloister there were manufactured hoes, shovels, ploughs, sickles and scythes.