St. Michael archangel church in Horní Dvořiště is first mentioned in year 1252. It had been founded by Vok of Rožmberk and it has been presented as a parochial church till 1384. The present building had been finished in 1511, the church burnt down in 1738 and then it was arched. Since 1658 is a vicarage under patronage of monastery in Vyšší Brod. The parochial memorials are kept since 1786. The church is located on the Southeast end of square at the former cemetery. The chancel is Gothic everything else is in baroque style. Two-storey tower is prismatic. The inner equipment is baroque. The main altar is in column architecture with central painting of St. Michael archangel, polychromatic statues of St. Josef and St. Antonín in living size stay beside. The oldest known bell is from 1773. 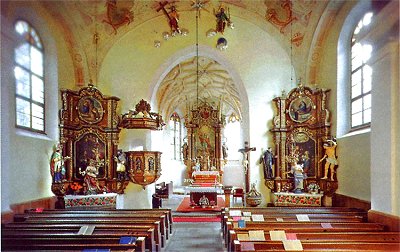