History of Mining in the Český Krumlov Region 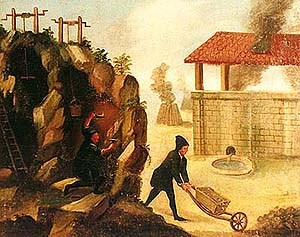 The mining of silver and gold had a special significance for society in the olden days. The precious metal was processed to make coins in a period, when paper notes were not used, and the coins were used as direct payment, and therefore it was not surprising that the majority of feudal lords tried to obtain as much profits from the mining of precious metal as possible. The results of research of the Middle Ages, which are at the present time presented by archaeologists, move the horizons that confirm that mining of silver and its processing in the region around Český Krumlov, in comparison with information obtained from written sources, further into history. Even though the effort to obtain silver especially was widespread in the Middle Ages, in the second half of the 15th century there was a great increase of interest by the aristocrats for this type of business. From the fifties of the 15th century originate the famous forgeries of Ulrich II. von Rosenberg, which were dated back to the reign of Přemysl Otakar II, and into the times of the first Luxemburgs on the Czech throne. Their content is simple. The Rosenberg family had been apparently given what was called "upper shelf", a right to the ownership of all precious metals which were mined on their land. These advantages were confirmed even during the rule of Vladislav II Jagellonský, and enabled the expansion of mining in the region of Český Krumlov ( and not only in its region), the expansion reached its peak during the first decades of the 16th century. The first preserved Rosenberg privilege to the competitive miners dates back to 1475, and like the one that followed, contained great advantages, which were supposed to stimulate the business men to start the "silver fever". The year 1515 represents a particular peak, when the Rosenbergs utilised the privileges given to them within the "upper shelf" right to state their own mining legislation. 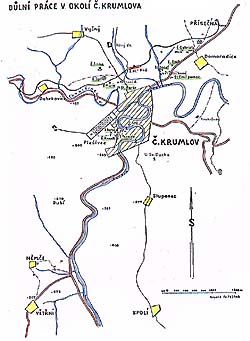 The so-called Annaberský rule, which strengthened the power of mining officers against the owners of the mining shares - so-called "kukus", became the bases of the mining rule by Peter von Rosenberg for the mines of Krumlov. Each authority with the "upper shelf" and the majority owner of the land (in this case the Rosenbergs) rented the mining regions to business men, who had, for the so-called "cupus" (obligatory taxes guaranteeing the continuation of the mining process) the right to share the profit, which was divided between the owners of the so-called "kukus" (according to the regulations from 1515 there were 128 of them). Where the Rosenbergs were the owners of the land, on which the mining took place, they were the majority holders and therefore the landlords and where the land did not belong to them, they were only the owners of a certain number of "kukus" - mining shares. The main officers of the mining estate had a responsibility to keep an accounts agenda, pay wages to the hired labour, keep note of all the tools and pass on all the silver that was mined. Only after the calculations were completed and the expenses taken away, the remainder of the profit was divided between the miners. Mined ore was melted down (it was a part of the rules within the rental agreements) in smelting works, which were solely in the hands of owner, the Rosenbergs. The labourers in the mines were divided into three categories of qualification (trained worker, helper and a trainee). They worked in three shifts, which started at four in the morning. Their wages were paid to them once a week for the hours worked, but it was also possible to come across a wage for actual work carried out. The majority of businessmen in mining industry came towards the end of the 15th century from German speaking regions, and brought not only the possibility of reasonably paid job opportunities but also a different style of life as many of them were of non Catholic belief. A special importance was placed on the groups of incoming Baptists. It was not surprising that a large labour colony and specially settled mining guilds ended up in conflict both between each other and most of all with the Krumlov town environment. 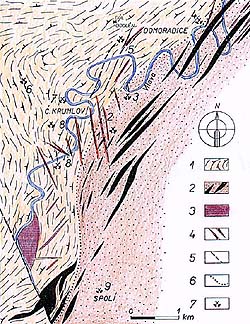 The whole second half of the 16th century, passed with the efforts of Wilhelm and Peter Wok von Rosenberg, who constantly tried to initiate a new "silver fever" but tens of thousands of invested gold coins didn't bring any significant effect. The most well-known events which led towards the renewal of fame (and especially profit) to mining in Krumlov, were at the beginning of the 16th century the gift by Wilhelm von Rosenberg from 1555, who gave permission to local and foreign entrepreneurs to mine free for the period of 15 years with great benefits on their findings, the efforts of this Rosenberg ruler to get profits in the mining districts of Ratiboř, Rudolfov and Kladsko and in the 1607 Peter Wok prepared a proposal, which tried to promote Czech mining. A definite, although short-lived, improvement in mining in Krumlov came shortly after the whole estate was sold to emperor Rudolf II von Habsburg, but deepening of all society's problems, before the eruption of the Thirty Years' War, prevented further development. Return to profitability of the mining on the turn of the 15th and 16th centuries did not happened.