The Devil's rock face, attempts to navigate through Devil's torrents

In 1725 the Schwarzenberg's wood sales manager Josef Holub was sent out to elaborate a new design for navigation through Devil's torrents. He was to design breakage of some rocks and erection of weirs, which could make it easy to navigate wood not just in logs but in floats. They started to destroy rocks in 1759 when the part of water-course of 400 sáh (1 sáh = 1,9 meters) long and 4 - 5 sáh wide was completely cleared for navigation. Today this part is between two Loučovice bridges. They continued with this work untill 1769 and they had to use more then 400 - 800 gold coins for these treatments every year. In 1902 L. M. Ziethammer wrote in his book "Šumava, country and people": "Since 1766 first floats were transported from Želnava hunting-grounds to Loučovice, where they were cut up into logs and navigated through Devil's rock face to Krumlov.

They continued with ripping rocks and their clearence from the water-course of Vltava river between Lipno and small church of saint Prokop later as well: "navigation was going on there even in 1784". All work was no good so they invited engineer Josef Rosenauer, who was later the developer and the implementator of Schwarzenberg's navigation canal". It was in 1780 but "Rosenauer's" designs were not realized because Josef Adam of Schwarzenberg (initiator of all works) died on 17th of February 1782". Josef Rosenauer developed a project for canal, which should leave Vltava river at today's Lipno retaining dam and it's journey is almost equal to today's road between Lipno dam and Vyšší Brod. Through this canal it could be possible to navigate rafts, timber-wood and logs. The water stream could propel even twenty lumber mills at the same time. The expences were enumerated for 73 thousand gold coins. The prince Jan Nepomuk of Schwarzenberg approved the project on spring 1785 and all work was suppose to began. Unfortunately the construction was not realized because of problems with land-tax and after construction of Rosenauer's navigating canal they did not think of continuance. The last time someone thought about navigating the Vltava river through Devil's rock face was after gale and windbreaks in 1870. Engineer J. Deutsche designed "two hundret degrees of wood with height of 40 - 70 cm". The cargo was enumerated for 520 thousand gold coins and it was not realized for financial problems. 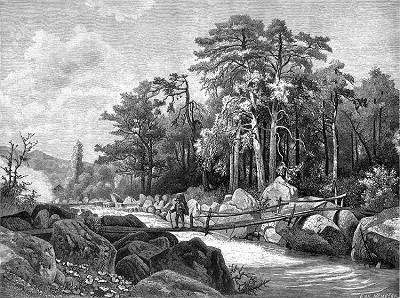 The real utilization of water power in the strong run of Devil's torrents was in 1750, when iron-mill was established by monks of Vyšší Brod monastery on the site of today's "upper paper-mill" in Saint Prokop. This iron-mill forged shovels and other iron products. The second iron-mill in Devil's torrents used to be on the site of today's "lower paper-mill" aand it was the property of Vyšší Brod monastery as well. After 1828 a flour-mill was a part of this iron-mill." The flour-mill did not prosper and the iron-mill vegetated, probably because of low expertise of hamerník (smith), whose štáfs and šifs were worse then those from the upper hamerník". Finally the Vyšší Brod monastery abbot was glad to sell this unused water-right to Ernest Porákin October 1884. First he used these two iron-mills for building the wood-pulp-mill and two great paper factories. At the begining of 20th century the whole system of water turbines has rised, using the water flow of Devil's torrents. The largest of these power stations was "Spirova power station Devil's rock face". The whole energetical system of water turbines was fully used until the consummation of Lipno retaining dam and Lipno hydro power-station. 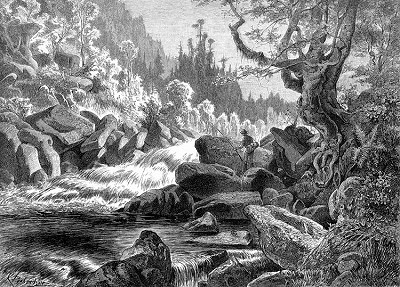 Water slalom is a race, where one has to get throught trace which is layout with gates in the wild stream. Just the same conditions were discovered in Devil's torrents in 1954. International competition in water slalom and rally is held there traditionaly every year. In 1967 the World championship in water slalom took place there and now when the water slalom became not just a olympic sport, but competition on artifical canals, the Devil's torrents trace under Lipno dam became one of the most beautiful and most difficult traces in the world.