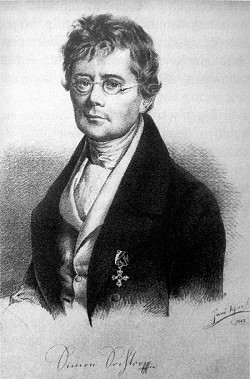 He was born on 11. October 1788 in Frymburk in family of hooper master Jakub Sechter. His mother died in the year 1798 and his brother Karel, hooper as his father, was the first elective mayor of Frymburk. Šimon Sechter was a court organist in Vienna and in years 1824 till 1850 he was a professor of music at Viennese conservatoire. Šimon Sechter liked returning to his native town Frymburk and died in Vienna on 10. September 1867.

Town Vienna built for him a monument and in the year 1870 was at his native house placed a detection marker. He was born in house No. 88 and "his father, who wanted him to be a hooper, upbraided him the often waste of time, which he spent with his own hand made piano without side plates". In his sixteen years became Š. Sechter in Vienna a pupil of Czech musician Leopold Koželuh, who socialized with Beethoven and W. A. Mozart. From the year 1811 was Š. Sechter teaching music in institution for the blind and an advice by him sought even Franz Schubert.

Šimon Sechter composed especially many compositions of spiritual music, symphonies, chamber compositions and twelve fugue on twelve-time themes. From each time comes one fugue. He composed three operas, one of them was played in the year 1844 in Vienna. He set to music many poems, in particular from František Schiller. In his work is Sechter meeting with Czech musical classicism from Koželuh and Jan V. Voříšek, whose inferior Sechter was in years 1824 and 1825. Š. Sechter together with Voříšek had interest in work of Johan Sebastian Bach. He was at Viennese conservatoire teaching lessons out of Franz Schubert also German piano-player and virtuoso Henri Vieuxtems and Mozart´s and Haydn´s biographer Karel Ferdinand Pohl.