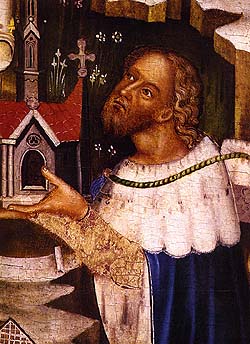 Peter I. von Rosenberg probably received his education in the Vyšši Brod monastery where he was led to a very positive relation and fondness to the church. He was called "Peter the Humble" or "Peter the Monk". He is credited with the construction of a new chapel on the Český Krumlov castle or the St. Jošt Church in Český Krumlov with its local hospital. His heritage enabled the founation of the minorite monastery in 1350 in Český Krumlov. He gave the order to have the altar-pieces painted for the decoration of the Vyšší Brod monastery by the master of the Vyšší Brod altar. He served as the highest valet at the court of Jan of Luxembourg where he, along with Jindřich from Lipé, was one of the most influential aristocrats in the country. He married the widow of the Czech king Václav III, Viola Těšínská.