He was born on March 22nd 1755 in Divice, region Louny. The first musical education he received from the organist Jan Václav Rokos. Eighteen year old Maxant left to play organ in Austrian monasteries and he became in 1773 a musician in Schlägl. He directed here from 1773 to 1776 the children cathedral choir and he also cared for singing and instrumental skills of boys. Then he was a teacher in Aigen. 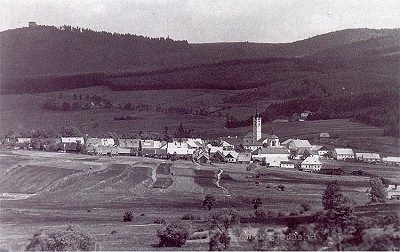 From the year 1786 until 1838 he worked in Frymburk as a teacher and organist. After death of his first wife he married again in the year 1822 with forty year younger wife E. M. Mauritzová. He died on 19. December 1838 in Frymburk in poverty and alone. He lost all possession in the year 1836 after his second wife purchased a mill. There were not left even enough money for burial expenditures so his grave was placed in front of church thanks to another Frymburk native A. Baumgartner.

Bohumil Dlabač shows from work of J. V. Maxant 18 masses, 42 arias, 6 requiems, preludes for organ and variations for piano. He worked in Frymburk school 52 years and was called during the last pay a meaningful teacher. Maxant paid in Frymburk great interest to teaching how to play on various instruments. He was an organist, choirmaster, parish clerk, teacher and stoker at school. He did all of it until his 83 years. He did not have his own children and brought up over fifty musicians. He became famous through Frymburk native Šimon Sechter. Musicology put him into the evolutionary series V.J. Nettle - J.V. Rokos - J.V. Maxant - Š. Sechter - A. Bruckner. In the year 1870 was dedicated to him at school (house No 36) a memorial desk, which has not been preserved. Present-day marker of J.V. Maxant comes from year 1988.