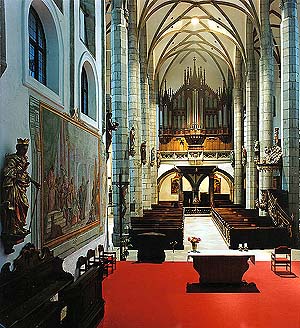 Jan was most likely a member of the Prague Mason\'s guild. His history is somewhat unclear and difficult to follow. From 1405 to 1410 Hans Krumenauer appeared in Passau who from 1407 was site manager of the construction of a local Cathedral. A stone-cutter of the same name had lived for some time in Landshut. The stone-cutter from Passau had a son Štěpán, a significant initiator of late Gothic architecture in Podunají, who decorated his coat-of-arms with a five-petaled rose. The Český Krumlov obituary mentions that on March 6 of an unknown year the stone-cutter Jan died while working on the construction of a vicarage church. The stone-cutter Jan had been called to finish the Saint Vitus church in Český Krumlov. He brought modern methods with him to Prague - flame tracery for windows and reticulated parlor type vaults that were made according to contract in 1407. For unknown reasons Jan was not granted to finish his work.