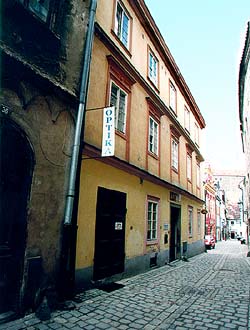 Description of the Building:
A two-storey corner house with front walls from 1875, when the larger part of it was built. There is a yard wing abutting on the right, a double-pitched hipped roof with a milder pitch in comparison with other houses. There are flat ceilings in most of the rooms except the cellars and some rooms on the ground floor.

Architectural and Historical Development:
The building is of medieval origin (some cellars probably originate from that time). A room with barrel vault with sectors to the right from the entrance corridor may have been preserved from the Rennaissance or Baroque period. All other rooms come basically from the 1870s. The building was expensively restored in the 1980s.

History of the House Residents:
The house belonged to the family of Krabac for the first forty years of the 16th century. The tanner Jan Krabac died in 1508, leaving his widow Barbora and son Jan, who took over both the house and the trade. Jan Krabac junior died in 1532 and there were three orphans left after him - František, Jošt and Markéta. The widow married a tanner Štefl (Štěpán). In the middle of the 1550s we meet there an unknown butcher Mates, who was soon followed by a shoemaker Simandl (Zikmund). Simandl´ s wife Barbora sold the house to a butcher Machtl (or Matl Alt) in 1570. It is possible that Machtl´ s widow Regina married a shoemaker Florián Ranner who sold the house to a tailor Jiří Funk and moved to the house No. 54 Na louži. Funk probably got rid of it quickly because the next owner Martin Kersten sold it in 1599 to a shoemaker Lorenc Lichtenberg and his wife Zuzana , who were paying it off till 1610. From 1619 the house belonged to a butcher Adam Rein whose family lived there until 1700. In that year the head of the registry office Ambrož Halatsek (Haláček) obtained the house. He was followed by Ondřej Lambl six years later. In the years 1728 - 1771 we have a bricklayer Matěj Anderst and from 1785 a town scribe Matouš Flödl. He was followed by Dominik Gauser (Ganser) who lived in the house till 1799 when Martin Pinsker moved there. After several other landlords Bedřich Pinsker reconstructed it in 1875.