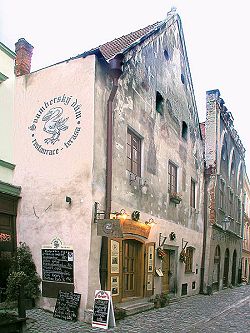 Description of the Building:
A one-storey house with three window axis and a pointed gable, the facade is not plastically molded; in the entrance hall is barrel vaulting with shallow ribs, on the left is a single-flight staircase leading to the first floor.

Architectural and Historical Development:
The house is of medieval origin and the cellars probably come from that time. There was an underground access to the building on the opposite side of the road and also to the yard. We cannot exclude the medieval origin of the vaulting in the left section on the ground floor. The entrance hall with a simple portal was reconstructed in the late Rennaissance period. The rear part of the ground floor and the top floor were newly renovated in the 1960s.

Significant Architectural Features:
The most valuable elements of the entire building are wall decorations on the facade that originate from the late-Middle Ages - it is the largest extent of such decorations of all the houses in Český Krumlov. On the gable are coats of arms decorated with the Rosenberg rose, a horse and a duck. On the first floor there is a mural of St Florian building the town, an unknown saint with a mitre, an unknown figure and an unknown symbol. We can also mention stone vaults in cellars and a simply profiled rectangular Rennaissance portal. 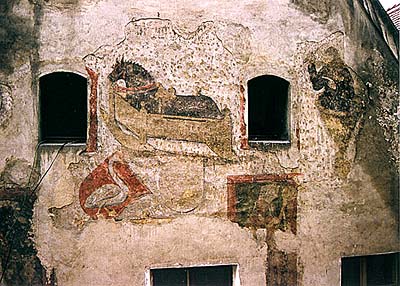 History of the House Residents:
Mates Platner, who was later followed by Baltazar Stadelbauer, was the first known owner of the house in 1582. From 1590 the house belonged to a butcher Mertl and three years later to Václav Pankl. The Hartingers inherited the house and they owned it until 1633 when Martin Schisslkorb moved there. He is mentioned as the owner of the house even in the second half of the 17th century. In 1687 the house was bought by Jan Petit. He owed 58 Rhenish guldens to the municipality and that is why he offered his cellar to serve the town´s brewery. In the years 1706 - 1769 the carpenter´s trade, which had successors in the family of Adalbert Holzinger, was carried out in the house. Josef Scheib moved there until the end of the 18th century, followed by Jan Stöger in 1790 and in the first half of the 19th century the family of Jan Zettle, followed by František and Františka Justl after 1840.