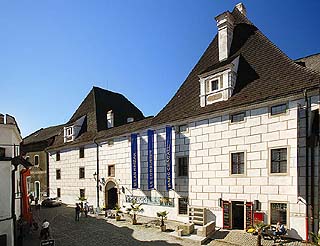 Description of the Building:
An extensive U - shaped complex of buildings with a yard abutting onto the street and a rear elevation which abuts on the former town wall. The street and yard facades are covered with letter type sgraffitos. In the street facade, somewhere in the middle, in the axe is situated a high boss portal of a carriageway leading into the courtyard. The high saddle roofs covered with shingle have set dormers covered with sgraffito decorations dated 1608. A Classical gallery is set above the wall, closing the courtyard towards the street. The opposite wing with a passage to the back part of the land parcel is partly covered with a Rennaissance staircase. On the right next to the passage and on the first floor of the back wing are situated extensive two-aisle halls vaulted with cross vaults with central columns. The interior construction of the second floor is wooden. The front right wing is all vaulted with barrel vaults with sectors on the ground and first floors. The second floor and the first and second floors of the left wing have all flat ceilings. The back elevation of the left wing is probably a former remnant of the original town wall. All the buildings in the complex have original Rennaissance collar beam roof truss with purlins, supported in the axis of the truss, containing wind bracing on the roof level and lay saddles.

Architectural and Historical Development:
The brewery buildings originated on the site of four medieval houses (one of them is the present no. 70). The Rennaissance building was built by a bricklayer Hans Haas in the years 1606 - 1608, according to the plans of Domenico Benedetto Cometta z Eckthurnu. The house no. 70 obtained its present appearance in the 1870s when it was linked with the neighbouring brewery and rebuilt into a brewery cold storage (see History of Brewing in Český Krumlov). The building underwent a radical reconstruction in the 1870s as did the other buildings of the brewery. Several additional buildings were built in the moat area at the back. Since 1993, the building has been undergoing a gradual reconstruction. 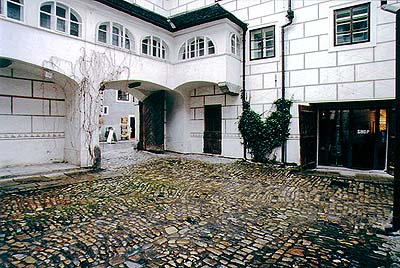 Significant Architectural Features:
The courtyard of the house has been preserved in its nearly original Rennaissance form. On the ground and upper floors there are two extensive halls with cross vaults and central stone columns. 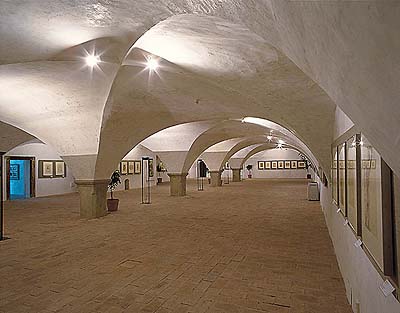 History of the House Residents:
The house no. 70 belonged at the beginning of the 16th century to a tailor Michal, who lived there to the end of the 1530s. In the 1540s, 50s, and 60s, it was owned by a carpenter Kryštof Raner. After his death his widow Ludmila sold the house to a town scribe Kryštof Kulička in 1567. The scribe Kryštof died in 1574 and his mother sold the house to an organ-builder Michal. From 1594 the house was the property of the family of a cooper Jakub Kaiser, who sometimes used a Czech version of his surname - Císař. In the years 1644 - 1658 it was owned by a tawer Kryštof Fink, who was followed by a councillor Alois Florián Hirnig. In 1679 a 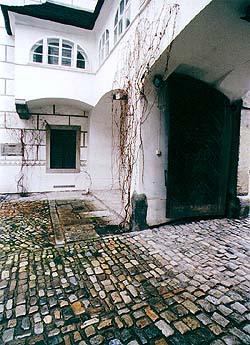 town maltster Vojtěch Warta or Bárta moved there. A Latrán teacher František Lederer lived in the house from 1688. In the years 1711 - 1768 wheelwrights Antonín and Jan Schwabl settled in the house. From 1774 a baker Antonín Pascher lived there. In 1790 a draper Ignát Kieswetter moved into the house and his family owned it until the 1840s. In the 1870s, the house became a part of the town brewery.

The house no. 71: On the site of the former municipal brewery there used to be three houses with their own history; the house neighbouring with house no. 70 belonged mainly to families who ran a maltster´s trade. The last owner was Jiří Rožďalovský, nicknamed Dermagen. In 1584 the house was bought by the Krumlov town council because the former malting house, neighbouring with the house no. 71, was to be enlarged. The last owner of the middle house was a maltster Wolfgang Houska, who sold it in 1523 to the Krumlov town council to establish the town malting house. The third house, neighbouring with the present house no. 72, was bought by the town council after the death of its last owner Adam Part in 1606 to establish a new town brewery. Brewery has been working till the WWII. After WWII it was abolished and buildings were used mostly as storages.