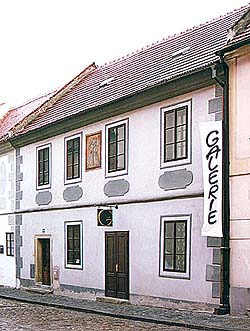 Description of the Building:
The present appearance of the house, built on the site of a former out-building of the brewing house at Soukenická No. 43, represents a building originated in the period of early-Baroque. Similarly as the neighbouring house No. 45, creating a construction link with it, the house has a preserved Rennaissance core and facade reconstructed in the Baroque style.

Architectural and Historical Development:
A built-in broken portal on the line with the neighbouring house No.45 demonstrates the medieval origin of the former out-building. The Rennaissance style reconstruction is evident from the character of the street facade as well as from the Rennaissance masonry on the ground floor and partly on the first floor. The Baroque reconstruction concerned mainly a large section of the ground floor (vaulting), the staircase hall and the front. The facade originates from 1676 - 1677. The Baroque layout of the house was modified several times during the 19th and 20th century.

Significant Architectural Features:
The house is attractive because of its front, plaster boss on the sides, while the windows are stressed by stucco frames. The art-historical value of the building is characterized only as average. Between the windows is a mural of Panna Marie of Kájov, which originates from about 1680.

History of the House Residents:
The core of the present house originally served as a production base of the malt-house at Široká No. 45. In 1676 the municipality of Krumlov bought the building from a hammer-miller Martin Klauser for 200 three scores of Meissen groschen. In 1680, two years after partial reconstruction, the municipality sold this property as a separate building to a tailor Šimon Reidl. Textile trades such as a tailor´s, weaver´s and draper´s were kept in the house until the first third of the 19th century.

Present Use:
Gallery and pension Folk