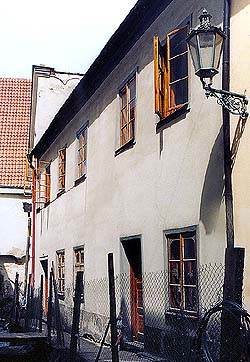 Description of the Building:
One-storey building with a smooth facade on a large allotment. On the street side ground floor and first floor are two lateral wings with barrel Renaissance vaults. Through the left part was originally a passage into a small yard, which led from a semicircular staircase upstairs. On the first floor is a barrel vaulted hall with sections, and the other areas have flat ceilings. The cellars repeat the two wing ground floor layout. Located by the rear facade are three Gothic barrel vaulted rooms on the level of the rear part landscape.

Architectural and Historical Development:
The building is of Gothic origin. The rear layout on the bottom level was preserved. The house was adapted during Renaissance. This adaptation changed the basic layout only a little. Completion of the layout occurred evidently in Classicism.

History of the House Residents:
At the beginning of the 16th century, the house was occupied by Matěj Fitka and his wife. After Matěj died, the house was acquired by a beneficiary Šimek. He sold it to a malt maker, Prokeš (Prokop), most of the time called "a malt maker under the rathouse", in 1514. After he died in 1566, his son Jiří sold the house with the approval from his mother Barbora to a blacksmith, Mikuláš Ebenauer, who resided in the house with his wife, Mariana. Mikuláš died in 1573. A tailor Kryštof became the next owner. After he died his widow, Magdalena, sold the house to a tin maker, Jošt, in 1582. In 1587 Dorota Mitasová bought the house, and in 1591 sold it to a baker, Erhart Silbermann, who moved into the house from Šatlavská No. 140. In 1598 a bricklayer, Hans Hás, called also Vlach, bought the house. He was most probably a brother of an Italian bricklayer, Benedikt Penny, from the house Masná No. 128. Voršila Hásová lived in the house until 1636 when he was replaced by a organist, Martin Perger. In 1685 the house belonged to an auditor of the princely artillery, Kašpar Mayer, who was replaced by a princely ammunition maker, Jan Schmidt. During 1699 - 1734 a court carpenter, Jiří Hans, lived there. From 1784 until the middle of the 19th century the house belonged to the Mauder family.