Architectural and Historical Development:
From an evolutionary aspect the layout is relatively vague, mostly without ceilings and vaults. By the next door allotment, No. 5, a wing is preserved, which is at the basement level. It is barrel vaulted with sectors. The building is from the 15th or beginning of the 16th century. The rear vaulted wing is probably Baroque or Classical. Further adaptation took place in 1867, when a colourman ironer's was established here. In 1964 more adaptations occurred.

Significant Architectural Features:
The facade has a stone portal with the initials IVL and the representation of a basket.

History of the House Residents :
Probably some time around the middle of the 16th century a lesser known baker owned the house and after him a potter Hansl. In 1573 a tanner, Linhart Has, who was alleged to be the owner until the 1580's. After him Regina Hasová took over the house and resided there until 1601. Until 1737 tanners and colourmen who coloured leather to red alternated ownership of the house. The first of these was a tanner, Filip Fink. Next was a colourman, Ondřej Reischl, and from 1658 another colourman, Kryštof Fink. From 1674 Julius and Zachariáš (1705) Lederer owned the house. Their family occupied the house until 1737. In this year Jiří Dillian moved to the house. From 1763 the house belonged to the Häussler family, who lived here until at least the 1840's. Also in the 19th century a tanner and colourman trade was conducted in the house. In 1867 a coulourman ironer's was established here. In 1929 the house was used as a milk shop. 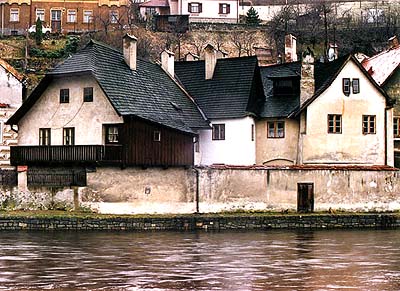 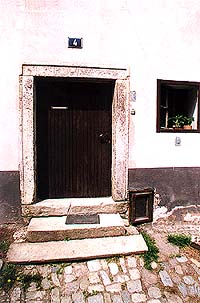