Location:
Horní no. 25,
Na Kovárně (On the Smithery)

Description of the building:
The building is situated at the intersection of Horní and Rooseveltová Streets. It has an irregular rectangular layout and pronounced Baroque gables. The building was originally two-storeyed with an extensive attic area. What has been preserved up to the present are a pronounced Baroque facade, richly articulated mainly in the front facade by lizenne frames, pilastres, stucco window decorations, and other architecural details. The roof dormers are new.

History of the construction:
The building is part of an original older building, likely from the 16th century. It was probably rebuilt in the 18th century with significant alterations in the 19th and 20th centuries. The building was significantly renovated in 1995. 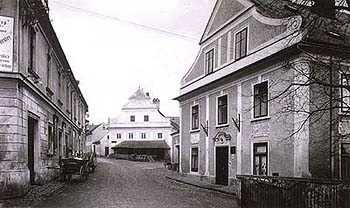 History of the residents: 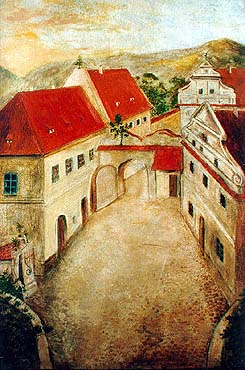 In property records from 1654 this structure, which then stood at the peak of a triangular-shaped piece of property, wasn't mentioned, and there was probably a garden and field here. On the site likely stood a garden house which was mentioned in the town's books in 1656 and 1665. Its first known owner from 1624 was Kotelík, who was also mentioned here in 1649. In 1656 the house was acquired by Tobiáš František, and after him František Tobiáš Koller in 1665. In the last 20 years of the 17th century and in the 18th century a blacksmith's was here, from whence the building has its present name. From 1682-1727 the smithery was owned by the smith Eliáš, and later the smith Matouš Krieger. The smithery belonged to this family until 1761, when Kašpar Glass appeared here. In 1787 Jiří Krieger equipped a new smithery here. The house was probably rebuilt into a home in 1802, and a year later the house and garden were sold to Antonín Berger. He had the house appraised in 1804 and leved here until at least the 1840's.