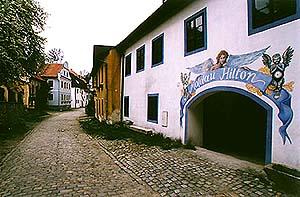 Description of the Building:
One-storey building with a lateral oblong layout, a non-sectioned facade, and a gable roof covered with shingles. Above the entrance is a modern painting of an angel with the writing Moldau Hilton. Along the facade is a wooden corridor.

Architectural and Historical Development:
The building was created in late Gothic style by building onto the town walls. In the oldest city books the house is mentioned in 1520, when the brick house belonged to a bricklayer, Steffel Czapek. The present image of the building is a result of a radical Classical reconstruction. 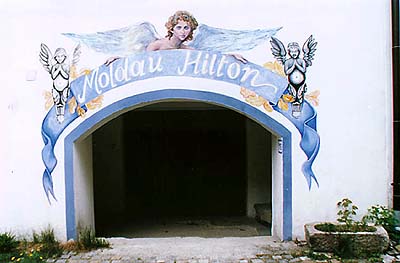 Significant Architectural Features:
In the right part of the layout is a black kitchen. It is, as are the rooms on the left part, vaulted. In some rooms is possible to observe ceiling transoms. 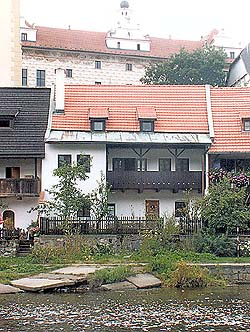 Beside the bricklayer Steffel Czapek (Čapek), who acquired the house in for 120 threescore of Meissen groschers, the house belonged to some Wolfgang. In 1578 the house was occupied by a carpenter named Stanzl. He was replaced four years later by a glazier named Pavel. A shoemaker, Petr Zettl lived there for a short time, and from 1588 until 1623 a cutler, Jeremiáš Lehmayer, owned the house. In 1654 - 1661 the house was occupied by a twister, Hans Tenpauer. After that two generations of malt makers, Wittek (Vítek), moved to the house. They owned the house until 1736. After that a butchery trade was conducted here. It was kept in the Streintz family. In 1759 a weaver, Josef Kurz, resided in the house. His family lived there until at least the 1840`s. Some time from 1900 - 1945 an atelier and photographic laboratory of Josef Wolf, who occupied a nearby house Parkán No. 112, was located in the house. (See History of Photography in Český Krumlov).