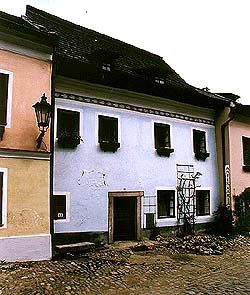 Description of the Building:
One-storey building with a smooth facade with a decorated strap with tulips under a cordon. The door has a stone dado. Along the rear facade there is a wooden corridor.

Architectural and Historical Development:
The building was created during the Renaissance period, before 1568, by building onto the town walls. From this time period the rest of the painted decorations has been preserved, although today they are covered by plaster. The late renaissance layout is composed of mostly vaulted rooms. The building went through a Classical adaptation which has been preserved on the rear facade. 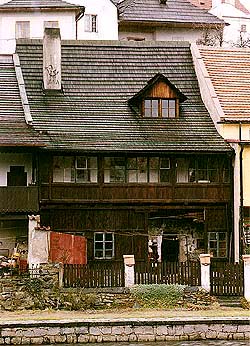 History of the House Residents:
The first known owner of the house was a twister, Ondřej Prümer, in 1568. He was allegedly the owner of the house until 1584. From 1600 until the 1620`s a saddler, Jiří Ufhauser, resided in the house. He was replaced by Ondřej Wes. From 1629 - 1652 the house was occupied by a Merten (Martin) Oexl family. Until the end of the 17th century the house was occupied by Petr Trozen, the Hans Scheidl family, Jan Kuchenharth and Jakub Matějíček. From 1689 until 1762 the house belonged to two generations of the Pos family. After that many people, like photographer Josef Wolf (1864 - 1938), resided in the house. He lived there at the end of the 19th and beginning of the 20th centuries. He had an atelier in a nearby house, Parkán No. 116, and a shop in Dlouhé No. 100, (see History of Photography in Český Krumlov). In the 20th century a writer, Jiří Mařánek, (1891 - 1959), the author of "Rosenberg trilogy", resided in the house.