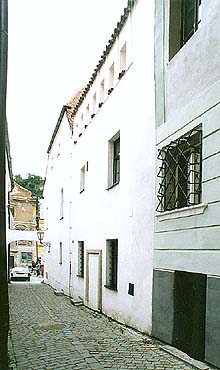 Description of the Building:
A two-storey house on a narrow site with a facade divided by two axes, each storey is of low height. The street facade is dominated by a horizontal attic gable broken through by a row of rectangular holes. The facace has two assymetrical window axes. The entrance granite portal is inset.

Architectural and Historical Development:
According to archival resources the house is a result of the separation of the rear part of the neighbouring house No. 39 in 1789.We can guess from the front wall that the house is of Rennaissance origin.

Significant Architectural Features:
A portal on the ground floor. 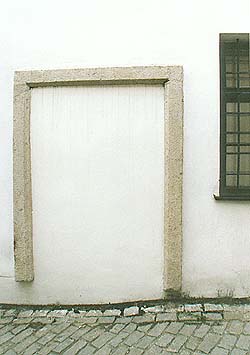 History of the House Residents:
To the end of the 18th century the house formed the back aisle of the structure at Soukenická No. 39. The exact time of building is not clear from the resource material. In 1789 a draper and the owner of the house No. 39 Jan Tragau was in debt, so his wife Magdalena solved the situation by offering the highest bid in the auction. She undoubtedly obtained the money from the sale of the back aisle of the house. The separated part was bought by their neighbour from the house at Široká No. 50, Jan Bican. Bican probably did not need the house to join it to his own, because he sold it to František X. Glossner six years later. Further material of property rights was not found. The house was left and became desolate after World War II.

Present Use:
The house is connected by commercial purposes with No. 50.