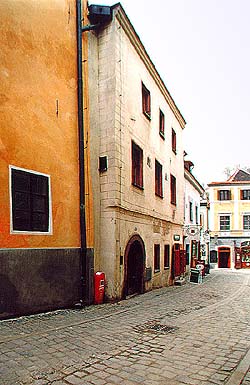 Description of the Building:
A two-storey house is covered with a saddle roof. The early Baroque front is flat, finished by an attic.The front is divided by three assymetrical window axes on the level of the first floor and the attic; the back elevation is divided by three axes. The ground floor layout is an irregular two-aisle with a lateral entrance hall; a small courtyard abuts on the rear elevation.

Architectural and Historical Development:
The beginnings of the house reach the 14th century, the time of the origin of the rear cellar with barrel vaults, the two-aisle layout of the back part of the ground floor and a part of vertical constructions up to the first floor level. At the beginning of the 16th century a late Gothic construction stage was probably carried out and due to this the front of the first floor overlaps slightly, plus there are some elements of facade decoration (window mounts; a picture of the Rosenberg rose, a draper´s brush and a weaver´s shuttle). Some essential parts of the first floor layout probably come from that time as well. The rear elevation, vaulting of the entrance hall and some interiors originate from the Rennaissance period as well as the roof truss. A Baroque-Classical reconstruction was carried out from 1760 - 1774, and there were further reconstrucrions done in the years 1807 - 1821. In 1986 the murals were restored.

Significant Architectural Features:
The house has remarkable examples of late Gothic architecture of the town, enriched with Rennaissance elements in the 16th or early 17th centuries (note the date of 1628 above the entrance portal). Besides the well-preserved layout, the house stands out by its late Gothic and Rennaissance details on the facade, such as murals, wooden joist ceiling, and the Rosenberg rose. 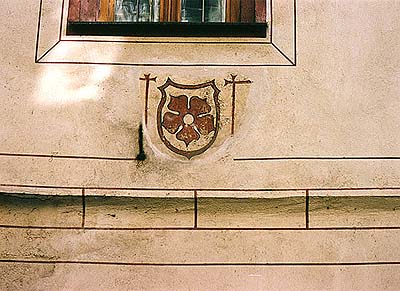 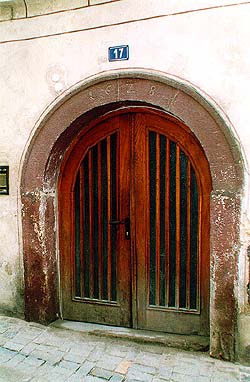 The first documented owner of the house was a draper Václav at the beginning of the 16th century. In 1526 the house belonged to a single woman Markéta, who probably did not get married because of a physical handicap. There is a note about her in the town register as a "limping maiden" . Markéta died in the same year, and the house was bought by Wolf Ott. He lived there to 1529 then sold it to Jakub Hanuš. He had a wife Klára and two sons Jan and Ambrož. Klára died in 1542, and Jakub even before her. In the 1540s and 50s the house belonged to a draper Václav, who we do not know anything else about. He was followed by a stationer Stallok in the 1560s and in 1570 he sold the house to a hatter Jiří Schram, who lived there until 1585 when he died. His widow Klára Schram married a hatter Michal Lorenc. In 1602 hatter Ondřej Walter was the owner of the house. Attributes of hatter´s trade on the facade of the house originate from that time. The Walters owned it probably to 1717, followed by a shoemaker Martin Handschuh. His son of the same name lived there to 1769.