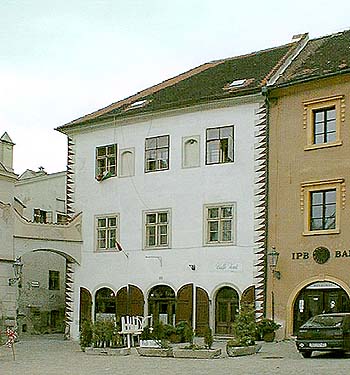 Description of the Building:
The smooth front facade of this two-story corner building has got remnants of Gothic, painted decorative work. Two windows, that have since their prior use been walled up, can be seen at the been at the level of the second story. On the smooth side wall that faces Satlavaska Street, a long bay rests on six stone corbels. Under this protruding bay are four windows with granite, Gothic jambs, which can be dated to the 14th century. The building is connected to the adjacent building (Náměstí Svornosti No. 2) by a horizontal arched buttress that runs across the alleyway at the level of the first floor. In the interior of the ground floor, on the left side of the former pillared arcade, is an entrance hall with groin ridged vaults which dates from the 16th century. Gothic barrel vaults, a richly decorated Gothic gateway with contoured consoles, and remnants of the former scullery remain in the back section of the first floor,. The vaulting in the cellar is Gothic.

Architectural and Historical Development:
Construction on this plot of land occurred in conjunction with the creative spirit that was prevalent in the town around the year 1300. The building originated in Gothic period, and has a core which can be dated to the second half of the 15th century. The building was renovated in the first third of the 16th century, and once again around the year 1600. In the 2nd half of the 18th century, when the building had a Baroque appearance, Classicism had an influence on the renovation work that was completed on the facade, and the second floor of the building was erected. After the fire of 1867, when much of the original shell of the building was burned, the structure was once again reconstructed. This time, dividing walls were added to the space in the ground floor. In the year 1925, the Renaissance sgrafitto on the facade was revealed, however, only to be eliminated in 1981 so that the original painted facade that dates from the late Gothic period could be revealed . The most recent work on the building was executed in 1991.

Development of facade:
From the sight of the Care of Historical Monuments the restoration work done in the 20th century on the front facade facing the street is thought to be a disaster.In 1925 the Classicism style and in 1981 the Renaissance style phases of the facade were almost removed while presenting the older developing phases of the building. The facade was restored in the Gothic-and-Renaissance style with some ground-floor holes designed in the Classicism style, as it can be seen at present. On the bases of finding situation, there are not any original details, apart from the corner leading to Šatlavská Street. 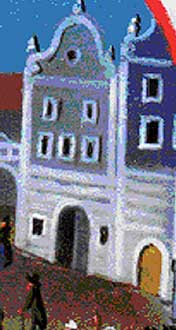 History of the House Residents:
It is recorded that the first construction of this building on this plot of land began around the year 1300. Apparently, after the Hussite War, the oldest documented Český Krumlov town hall was established in this building. The town hall carried out their activities on the first floor and part of the ground floor. The remaining section of the ground floor was, in the mid-15th century, filled with stands where weavers could sell their goods. A pillory was built in Svornosti Square in front of this town hall. The existence of the town hall in this building, and in this location lasted until the year 1519, when the building was then sold by the town council to the tanner Štětka for 125 Meissen groschen. After Štěka´s death, a revenue clerk of the Rosenberg family, Václav Maškovec, inhabited the building from 1542-1562. Noted among the next owners are, for example, the weaver Mates Angstwurm and his wife Anna Čertová, who later sold the building in the year 1606 to Vilém Finkenbauer for 930 Meissen groschen and Jiří Nigrín, also known as Houska, who bought the building in 1621. In the year 1654, the building was being used as a brewery and in 1867, the building was severely burned by a large fire. The ground floor was reconstructed to accommodate two shops, which have been occupied through the years by various businesses such as, a clock shop, a butcher´s, a barber´s shop, a dairy, and a café.

Present Use:
Under construction