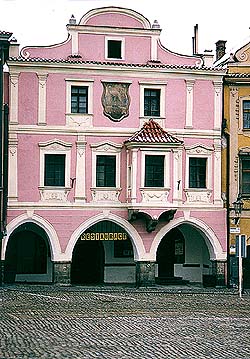 Description of the Building:
This two-story building is covered by a saddled roof and has got a Classical style facade which dates to before the year 1800. Approximately in the middle part of the front wall, at the level as the first story, there is an bay that is supported by three stone corbels. At the level of the second story a wall mural of St. Jan of Nepomuk is painted on the facade. In the upper part of the front wall there is a parapetted gable which emphasizes the second story of the building. The main front wall is decorated with Classical elements-festoons and cornices. Three wide, rounded arches on the ground floor mark the entrance to the groin vaulted arcade. The west side of the building, which faces Soucenicka Street, is decorated with sgrafitto. At the entrance to the interior of the ground floor there is a pointed arched, Gothic portal and through the portal there is an entrance hall with barrel vaulted ceilings. A late Gothic portal marks the entrance to the smaller room (also with barrel vaults). On the right, there is a room with a carved joisted ceiling which dates from the Renaissance period. Behind this room, there is a courtyard area and another room. A spiral staircase leads to the first floor. On the first floor, the Renaissance layout of the rooms and their carved, joisted or coffered ceilings are well preserved. Renaissance frescos from the 1570s remain on the walls of the staircase and in two of the front rooms on the first floor. Extensive, barrel vaulted cellars with Gothic portals remain under the front part of the building. 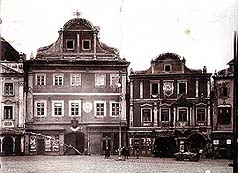 The original Gothic foundation of this building dates from the 14th century. Around the year 1500 the building was reconstructed; the arcade was created and the front parapetted gable and bay were added. Between the years 1555-1576, Matyáš of Fuchýřov made Renaissance alterations made to the building; the sgrafitto work on the facade was added, some of the interior rooms were equipped with wooden joisted or coffered ceilings, and the walls were decorated with themes from Ovid´s Metamorphosis and from ancient mythology (Lovers in Bed, Pyramos and Thisbe, Leukothea Loving Appollo, Wreath of Luck) - this room is known as the Pink Salon. These were executed according to a model by German artist and engraver Virgil. When Baroque-Classical alterations were made around the year 1784, the front facade was refaced and the attic space was added. In the year 1891 the arcade was walled up and the Soukenická Street facade was renovated. The building was renovated to its present-day appearance in 1950-1955.

History of the House Residents:
In the year 1424 a man named Paldus owned the building. Subsequent owners of the building were a tanner by the name of Mertl and later two tawers named Štefl and Alexandr, who was at the same time a town chancellor. In 1560 the building was sold by Ambrož Fritz to Rosenberg accountant Matyáš Fuch of Fuchýřov , who was also the chamberlain of the Český Krumlov nobility. He had Renaissance style alterations made to the building in 1562. Matyáš Fuch was married three times. His first wife Magdalena was the daughter of the important Krumlov citizen Tomandel na Louži. In 1585 his wife and their new born baby died of the plague. Later that same year, Matyáš was remarried to his second wife Anna, who was the daughter of Oldřich Avostali da Salla, who was the master building of the court of Emperor Rudolf II. Anna died after the birth of her son Šimon Tadáš, who later became the chief magistrate of Český Krumlov. In 1590, Matyáš was married for the third time, this time to the daughter of the then chief magistrate Linhart Kardinal Ludmil. Matyáš died in 1598 when there was a plague epidemic in Krumlov. In 1654, the building belonged to Jiří Břenský and was used to brew and serve beer. Between 1739-1784 hand-crafted cabinets were produced here. In 1908 the building was purchased by the Krumlov community with the intention that it would be demolished for the benefit of the town hotel. Fortunately, these plans were not carried through. The building has been used however, as part of the town hotel since the 1950s.