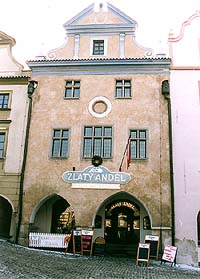 Description of the Building :
This one story building has an early-Baroque gable wall that conceals the steep pitched roof which is covered with terra-cotta pantiles. This gable is filled with Classical decorative elements and has got the emblem of the Rosemberg family, five-petalled rose at the top of the gable. At the ground floor level of the facade, there are two pointed arches that mark the entrance into the cross vaulted arcade. In the barrel-vaulted hallway in the interior of the ground floor there are Renaissance decorative stucco squares along the sides of the walls that have pointed arched niches. The rooms on the first floors have all got flat ceilings The rafters of the building date from the Renaissance period. The cellars are constructed of stone barrel vaults. In the courtyard, on the edge of buildings no. 9 and 10, original ground floor construction and an old well remain.

Architectural and Historical Development :
The original building is Gothic and has a front arcade that dates to around the year 1510. The building underwent a Renaissance renovation project in the mid-17th century, when the present-day front facade was executed. The most recent renovation project took place in 1988 when the arcade was rebuilt and the decorative appearance of the facade which contains Gothic, Renaissance and early-Baroque elements, was made more harmonious. 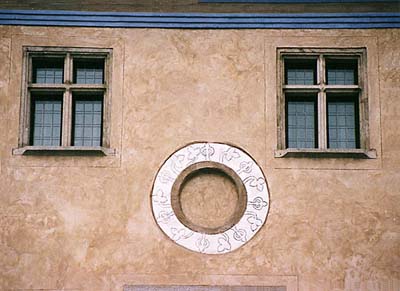 History of the House Residents :
In the year 1424 the owner of the building was a man named Fišar. After Jan Pemrlov and Matyáš Puklik the building belonged to Václav and Voršila Haluznovi from 1500. When Václav, who was a town council memeber, died in 1521, his wife Voršila sold the building to Jan Flackrab with the condition that she could stay in the building until her death. She died in 1540 and according to Voršila´s will, she produced three large and two small silver goblets, pieces of silver, silver belt buckles and other ostentatious silver goods for the parish St. Vitus Church. After the Flackrab family, the ownership of the building was in the hands of Stanislav - Štancl Plankl. After he died, the building was acquired in 1569 by Filip Svérazský. In 1650 the building was taken over by the Eggenberg´s master clerk Martin Zahořanský, who brewed and served beer in this building, among other activities.