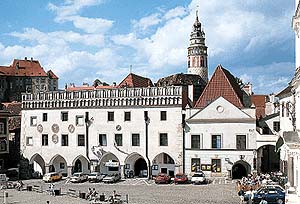 Description of the Building:
This one-story, Renaissance building that sits on the corner of the town square Svornosti is topped with four saddle roofs that each have a pitch that runs perpendicular to the front facade. In the front of the building, on the ground floor, there is an arcade which is marked by six pointed arches that are supported by rectangular pillars with beveled edges. The arcade is constructed with cross-vaults. On the far right side wall of the arcade there is a ceramic map of Český Krumlov. The main facade of the building is topped off with a high, parapetted attic wall which is marked by two bands of small, engaged columns. Glazed Rococo vases rest on this parapet. In the upper left corner of the facade, just below the parapet, there is a small bell. On the left half of the facade there are Renaissance window jambs which have been encased in the wall, on the right a Gothic window jamb, and in the middle there are four stucco emblems. The entranceway to the interior of the building is marked by a Gothic, pointed arched portal. The symbol of the Rosemberg family, the five-petalled rose, is painted in the space above this portal. To the left of the portal, there is a fragment of a Gothic window with circular tracery. The entrance hall with rounded and ridged vaults contains fragments of two Gothic portals with cross-hatched design work. In the hall on the first floor there is a modern-day joisted ceiling which is supported on its edges by brackets. The vaulted cellars which date from the Middle Ages, lie under the majority of the building and are predominantly constructed of stone.

Architectural and Historical Development:
According to the ground plans of the city that were drawn in the 14th century, construction on this plot of land first took place around the year 1300. The ground floor front arcade was added to the building at the decline of the Gothic period. In the second half of the 16th century, the two (or perhaps even three) separate Gothic buildings (the original town hall and a burgher´s home) that stood next to each other on this plot were joined together. The interiors of the buildings were connected and the Renaissance parapet was added to exterior front facade to give building a more unified appearance. A courtyard area and was added during this Renaissance renovation project, as well as the groin vaults in the main entrance hall (before the year 1564). In 1796, the parapetted attic wall was remodelled to its present-day Classical style and further alterations were made in the 19th century, when this parapetted wall was shortened slightly. During an extensive reconstruction project that took place in 1924, the arcade that had been formerly enclosed was opened up and the emblems on the front facade were revealed. From 1938 - 40 the courtyard section with meat stalls was demolished and the present - day interior was executed.

Development of facade of left town hall wing:
In the Middle Ages it used to be two separate citizen´s houses with the rough plaster adaptation. A grey-coloured band framed the stone jambs in the corner building in the Gothic-Renaissance period. One of the two possible gables was preserved.

In the late Renaissance period, after 1598, both buildings were put in one, and the unified facade was decorated with the pyramid-shape rustic-work finished by the attic gable and gable extensions. The attic gable was decorated with the illusion painting. The covered walk with six arcades articulated the ground floor. In the Baroque period the graffito decoration was covered with a new plaster in a white-and-brown-coloured scheme.

In the Classicism period, in 1796 as a result of the windowstorm, the attic gable was decorated with terracotta vases. The facade was articulated with a white-and-red-coloured scheme, as it can be seen in the icongraphy of that period. In the second half of 19th century three arcades were walled up with the use of white-coloured and later grey-coloured paint. 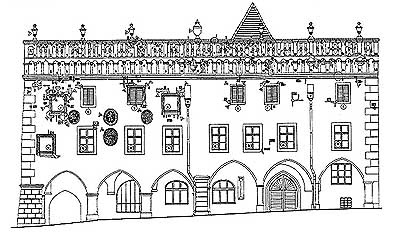 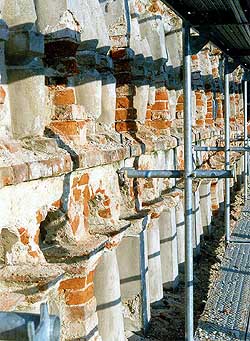 History of the House Residents:
The original Gothic structure from the 14th century was joined with the adjacent structures to make one large structure in the second half of the 16th century (circa 1597). The building was second oldest town hall of Český Krumlov (no. 24 and no. 26) and the residence of the wealthy Čert family (no. 1). This apparently belonged to the honorable abbot of the monastery of Zlatá Koruna, Teodorik, who erected the building in the year 1309. The building remained in the hands of the Zlatá Koruna clergy until the year 1424. In the second half of the 15th century, the ownership of the building was taken over by Ulrich von Rosenberg, who then sold or gave this building to the Metlín family of yeomen from Metlín. One of the members of this family, Peter Pryms, bequeathed this building to an unmarried woman Voršila Mikuláš after the death of his own wife. This decision however, evoked indignation in the neighbors and the town officials, who considered Voršila a wretched woman, and Petr Pryms evidently even scrooged his own children out of their inheritance for her sake. Voršila apparently didn´t fight too hard for her ownership rights of the building, and from 1582 the building belonged to a wealthy Austrian businessman, Ondrej Certa-Teufla, who was a member of the town council. The town council bought the building in the year 1597 with the intention of making it their new town hall. From the year 1600, it is documented that the new town hall served as the sight for many aristocratic weddings, including that of Jan Zrinský of Seryn with Mary Magdelena of Kolowraty, during which 30 horses were stabled inside the town hall. The mayor and even the town officials originally worked out of their homes. Only in 1752 did the official Stejskal set up an office in the town hall, and in 1791 the mayor moved into the building. In 1805 the town hall was supposed to undergo a general reconstruction, in which an arcade and tower were to be added, and the register with archives were to be moved to the ground floor, so that they could be more easily protected in case of a fire. The project wasn\'t realized due to lack of finances. Many valuable items were stored at the town hall, for example golden keys to the city gates, which were given over to the nobility when they visited the town, plus the town seal and silver dishes used during feasts honoring the renewal of the town council and for other festive occasions.