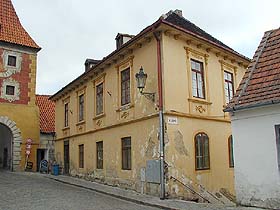 Description of the Building:
Two story building standing on a sloping terrain with a front from 1871. Near the left corner, there is an immured window with a granite ribbon-shaped stucco decoration and a band course. Modern wooden gallery is located along the back of the house. The double-pitched roof is covered with shingles.

Architectural and Historical Development:
The ground floor has Renaissance origins, as evidenced by the immured window similar to the windows of neighboring houses of Domenico Benedetto Commeto z Eckthurnu. Later, the house was extended and the second story added. There is a cellar with hemicycle barrel vaulting near the street.

History of the House Residents:
The first known owner of the house was overseer of the granary Karel Miletický who may have commissioned the construction. That was before 1623. The city council owned the house between 1623 and 1638 and then sold it to blacksmith Jiří Precht. Farrier Michal Ješka lived in the house from 1651 to 1701. Many people lived in the house during the eighteenth and nineteenth centuries but there is no detailed information available about them. 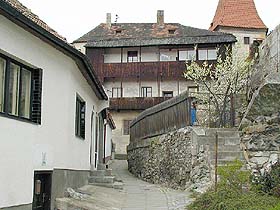