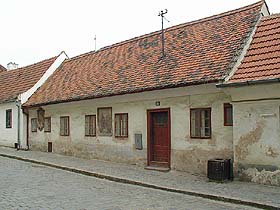 Description of the Building:
One story building with a rectangular floor plan standing on a sloping terrain. The plain facade is decorated with a fresco of St. Florián with an embossing of a burning city in a Classicist teracotta frame, a painting of the Holy Family and a statue of Jesus Christ in a carrel, which is a remarkable piece of folk art.

Architectural and Historical Development:
The house was built around 1600, the oldest written record being from 1619. The left side, probably partially made with logs, is separated by a wall one meter thick even in the cellar. This seems to have been was added later. The old gallery was replaced by a new one during the 20th century.

Significant Architectural Features:
The plastered log construction of the division wall as well as a part of the rear face of the house is interesting. The right side of the cellar has hemicycle barrel vaulting.

History of the House Residents:
The first known owner of the house was in 1652 Zuzana Bischofová, the old castle laundress or a woman of the same name. One of her sons lived here from 1694 to 1736. His name was Josef and he worked as a potter. The Bischof family owned the house until 1775 when Antonín Kirchsdorfer moved in. 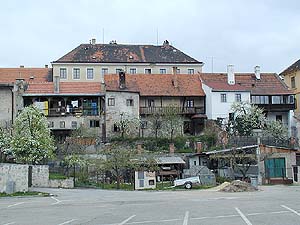