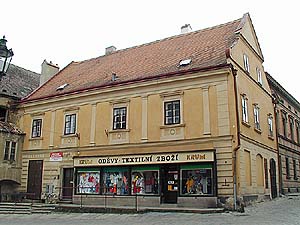 Description of the Building:
Two story corner building covered by a double-pitched roof and a narrow Classicist front with a rectangular gable with tympanum and volutes on the sides. The front underwent a neo-Renaissance modification during the 1870s.

Architectural and Historical Development:
This is a Gothic house, and might have been adjacent to the original Latrán gate. The cellar, perimeter walls and probably also the basic layout elements are preserved from the Middle Ages. The vaulting on the first and second floors is the result of Renaissance modifications of the second half of the sixteenth century. The Baroque-Classicist modifications are mainly visible near the west volute gable. The house was radically modified during the 1870s and 1880s; changes include the neo-Renaissance style of the front.

Significant Architectural Features:
Interesting are the vaulted spaces, especially the stone barrel vaulted cellar and the room on the second story next to the neighboring No. 71 that has barrel vaulting with caps. Besides the volute gable, the neo-Renaissance facade is also remarkable for Český Krumlov. 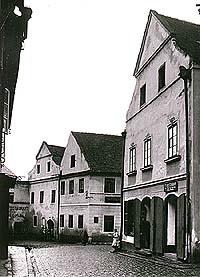 History of the House Residents:
The first written record about the house is from 1565, when it was owned by Šimek or Šimon Holtzhair. After his death , his foster son Ambrož used the house. Weaver Ondřej Wess, who owned Latrán No.51 in Klášterní, bought the house in 1629 for 310 three scores of Meissen groschen and this price remained unchanged until 1684. In 1724, the price rose to 650 and in 1771 to 950 florins. From 1684 to the nineteenth century, there was a bakery in the house and the baker had the privilege to sell bread. Baker Valentin Preininger, purveyor to the court, lived in the house. He started his carrier in the Eggenberg court as a fellow baker around 1667. A fancy goods store was established here in 1937.

Present Use:
For rent