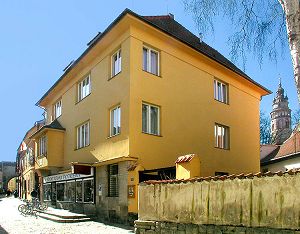 Description of the Building:
Modernized three story house with a brisolit front.

Architectural and Historical Development:
Originally a late Gothic house (before 1500). The three story house was built in 1934. In the right part of the courtyard, there is a two story house adjacent to the preserved city wall with barrel vaulting on the first floor. There is a portal in the facade with small cantilevers.

History of the House Residents:
The first known owner of the house was Rosenberg clerk Adam Sudek of Dlouhá during the 1540s. His family owned the house until 1588, when another Rosenberg clerk Jan Vamberský of Rohatec bought the house. 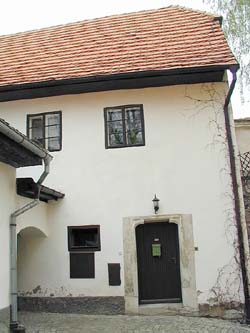 Wilhelm von Rosenberg purchased the house in 1592 for 605 three scores of Meissen groschen and then his brother Petr Wok von Rosenberg became the owner of the house. In 1593, he gave it to his clerk Šimon Netolický who lived in the house until 1603. The family of blacksmith Hans Erl then moved in and lived here until 1633. Shoemaker Hans Gerger or Jőrger was the next owner. Butcher Ondřej Venuš bought the house in 1680 and in the end of the seventeenth century court servant Jan Canevale and master carpenter Daniel lived here. During the eighteenth century, overseer of the Claretian convent Martin Lang or stocking-weaver Josef Torkowitz lived here.