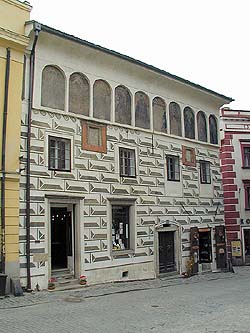 Description of the Building:
Two story corner house with a diaphragm arch over Klášterní street. The house has a sgraffito facade, and there are arcades under the modern cornice with a painted Renaissance series called"Lifecycle", which is supposed to represent ten stages in the life of man, from boyhood to death. The arcades on the side of the house contain abswing paintings, depicting maybe alchemist scales and Cabala signs. There are small Gothic windows with angled edges and red Gothic embossing.

Architectural and Historical Development:
This is a Gothic house, as evidenced by the preserved architectural elements (front windows, damaged small profile portal, stairway and the left wing). It was reconstructed in several stages during Renaissance. The sgraffito and lunette paintings were made around 1580. Windows that would correspond to the sgraffito frames on the side of the house are covered by Renaissance vaulting and modern truss. The eighteenth century saw small modifications being carried out - the height of the individual stories was changed in comparison to the Gothic and Renaissance state. The 1895 reconstruction had rather a negative impact on the house. The house was renovated in 1955 and the mural paintings in 1994.

Significant Architectural Features:
The house is very valuable because of its front and vaulted rooms. The most interesting is the mezzanine space next to Klášterní street with its rich net vaulting with groins. On the second story, there is a room with a rich neo-Renaissance stucco ceiling. A vaulted arcade has been inserted into the older joined space. 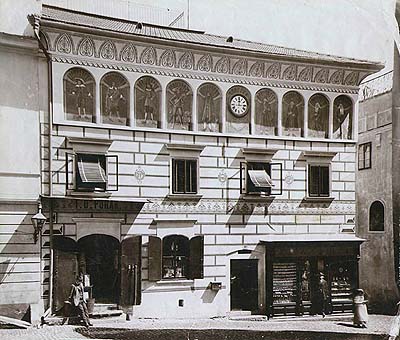 History of the House Residents:
Overseer of the Rosenberg fisheries Wolf lived in the house during the last two decades of the fifteenth century and in the beginning of the sixteenth century. He then moved into Latrán No. 48 and the house was purchased by potter Ondrášek who owned the house until the beginning of the 1540s. The house was then bought by maltsman Jakeš (Jakub) Houska. He died in 1555 and his probably very young wife Anna married within the following five years with court butcher Šebestián Straubinger who died in 1589. The figurative facade paintings were probably made at this time.

After Straubinger\'s death, the house was acquired by Wilhelm von Rosenberg who the sold it to his cook Kašpar Lehman. Kašpar died in 1599, probably during that year\'s plague. The widow Magdalena married burgher Josef Műllperger from Prachatice, moved to her husband\'s hometown and sold the house to baker Matyáš Händl. His family lived here until 1640. A brewery is mentioned to have been in the house in 1654 but not for a very long time, as it was there at the beginning of the eighteenth century. An emperor toll-gatherer in Vltavice named 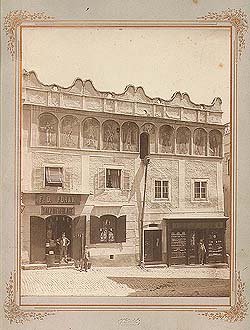 Present Use:
Ceramics Roseta is on the first floor along with Granat - garnet jewelry. The second floor is residential.

Significant historic photograph:
The photograph captures the original roof hidden behind the arcade and attic, with another lower story with small pillars and volutes and is kept in the District Museum of National History in Český Krumlov.