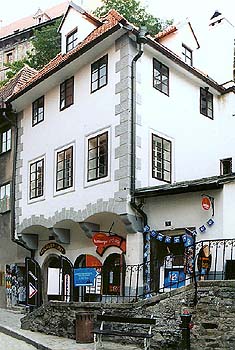 Description of the Building:
Corner three story house with the second story standing on stone cantilevers. The corner has a plaster embossing.

Architectural and Historical Development:
This is a Gothic house which was rebuilt during the Renaissance. There are additional Classicist modifications. The second story faces the street elevated on ancons. Part of the cellar has Welsh arches and the same may be found on the second story.

Significant Architectural Features:
There is a space with Welsh arches on the second story. 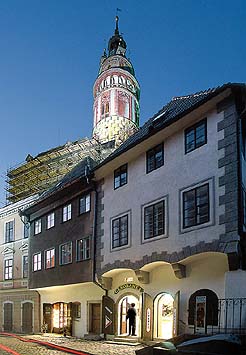 History of the House Residents:
The house was probably built before 1500 - the first known owner was Kateřina Halačková, followed by Ondřej Mečíř in 1528. After four years, cloth-maker Prokeš moved into the house. In 1554, it belonged to Ondřej Nyndrtom and after him a cabinet maker named Jiří. Then locksmith Hans Gettich, followed by book-keeper Martin Gallus. From 1643 the house was the property of gun maker Václav Pacovský, then inherited by Josef Feuchtel, a clerk of the brewery in Schwartzbach (now Černá v Pošumaví). Punčochář Oldřich Kleer lived in the house in 1747.