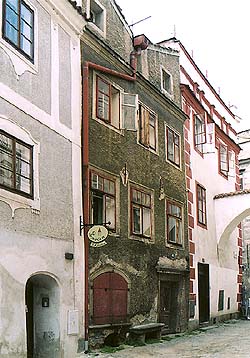 Description of the Building:
Three story building with a Classicist front standing on a narrow plot. The entrance portal has a Renaissance hood molding.

Architectural and Historical Development:
The hearting of the walls is late Gothic but the house itself is from the late Renaissance period with preserved spatial arrangement. It was rebuilt during Classicism.

Significant Architectural Features:
Valuable are mainly the hemicycle barrel vaults on the first floor along with the originally joined space in the rear of the house with cross vaults ending in a central stone column with a late Renaissance shape.

History of the House Residents:
A man named Slupenec lived here in the beginning of the sixteenth century, followed by tailor Honza who lived here only shortly. He sold it in 1519 to the Rosenberg fisheries overseer Wolf. When Wolf died in 1523, the house was acquired by a man with the same responsibilities named Vaněk (Václav) Zvíkovský. Around 1565, fisheries overseer Vít purchased the house and lived here until he died in 1585. 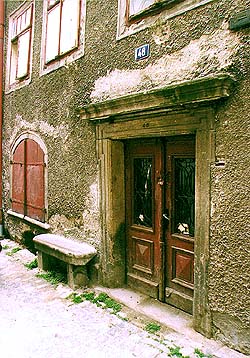 His wife Magdalena married a Swiss mason Adam Khenz in 1592. Shortly after Magdalena\'s death, Adam married Anna, the widow after maltsman Frošauer, who owned Latrán No. 49 and in 1619 sold the house No. 48. During the second half of the 1640s, joiner Jiří Gibl purchased the house and lived there until 1649 when chimneysweeper Hans Gräz moved in. Goldsmith Kryštof Kritta lived here from 1662. Between 1729 and 1741, weaver Josef Torkowitzer owned the house. After his death, the book-binding trade was practiced in the house here until the 1830s by Jiří Neuhaus and then two generations of the Schullerbauer family. This family lived here at least until 1840.

Present Use:
Residential house (under reconstruction)