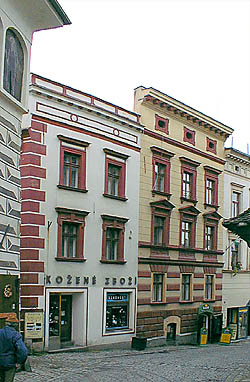 Description of the Building:
Three story corner building with a front that was built during the last quarter of the nineteenth century. A fragment of a Renaissance gable with small columns is located in the center of the side face of the house. The roof has an attic.

History of the House Residents:
The first owner that we have written records about was Matěj Krychník at the turn of the fifteenth century. Brick-maker Honza purchased the house from Matěj in 1514. After he died in the 1520s, his wife Dorota married blacksmith Šimon who probably thought that the house was suitable for his trade and exchanged it with Šimek Buben for Latrán No. 69. Buben died in 1537, then the house belonged to his wife and son. Maltsman Symandl (Zikmund) owned the house during the 1540s and 1550s, followed by maltsman Velentin known as Fanta. Mason Honza Gosch or Koš who had come to Český Krumlov from Vimperk was the next owner of the house sometime during the 1570s. This mason built the crypt in the St. Vitus Church in Český Krumlov for the remains of Anna Marie Bádenská, the third wife of Wilhelm von Rosenberg, and for Wilhelm\'s remains also in 1592. The family of Gosch\'s son Baltazar lived in the house until 1628. City clerk Tomáš Freyss lived in the house from 1630 and after he died in 1638, his wife Juliana lived here. Saddler Hans Schambach owned the house after Juliana and lived there unitl 1654. The Alt family of chimneysweepers purchased the house in 1697 and lived here during the first half of the nineteenth century.

Present Use:
Hefaistos, Leather Goods and Hats. The upper stories are residential.