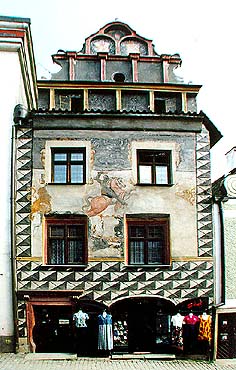 Description of the Building:
This is a three story building with plain facade with two axes, with a Renaissance label molding on the ground floor. It has a Renaissance gable with vertical cornices and small pillars ending in a Venetian vaulted shield. The facade has letter-shaped sgraffito and a mural painting of the so-called Rosenberg rider. The house has a double-pitched shingle roof. On the left side of the narrow courtyard is a vaulted gallery.

Architectural and Historical Development:
The part of the building near the street is Gothic, reconstructed around 1550. The rear part including its foundation was built during Renaissance. Minor modifications carried out during Baroque.

Significant Architectural Features:
Remarkable is the facade and the original Renaissance interior layout with the large barrel vaulted hall with a stairway. There is a barrel vaulted chamber in the rear part of the house with a passage into the small courtyard. In the rear of the ground floor, there is a chamber with barrel vault with caps. The cellar has the same type of vaulting.

History of the House Residents:
The first known owner of the house was Václav Kobluzník, followed by Jiří Zeltl in 1528. A man named Sittar or Sikora lived here in 1557. Rope-maker Kašpar Wallinger lived in the house from 1573 and before 1590, the house had a new owner as Regina Pernerová. Rope-maker Adam Perner owned the house until 1599 when Pavel Rieckh moved in. 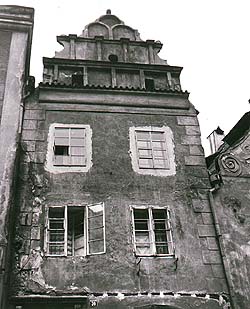 Pavel Strauss bought the house around 1629 and lived there until 1657. Records from 1654 state that there was a wine tavern in the house. The Emperor\'s toll-gatherer Bernard Torkowitzer lived in the house from 1699 to 1725. Then it was cloth-maker Ondřej Bek\'s and from 1761 another cloth-maker\'s, Antonín Miller. After 1773, the house was owned by Jakub Beneš, in 1789 by Adalbert Walha and in 1790 by Antonín Falta. František Wolf owned the house from 1825 until at least the 1840s.