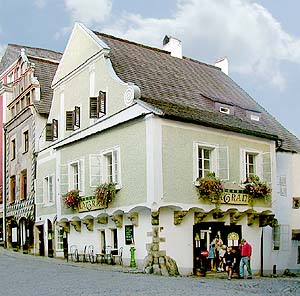 Description of the Building:
Two story house on the corner of Latrán and Pivovarská Street with a double-pitched shingle roof. Part of the second story of the size of two window axes from both sides of the arris to the end of the building on the Pivovarská side stands on ancons. The gable facing Latrán is Classicist but it was damaged by an insensitive modification after 1970. The corner ancons have a rose with five leaves.

Architectural and Historical Development:
The plot includes two setting-places probably from the fourteenth century. They were untied during the late Gothic period, most likely around 1550. Significant Renaissance reconstruction took place from 1573 to 1591. It modified the cellars, first story (vaults) and the second story which probably had several wooden ceilings. The ancons probably date back to the late Gothic period. Early Baroque modifications were not significant. A Classicist gable was added to the front of the house at the end of the eighteenth century. The first third of the nineteenth century saw some corrections of the interior layout of the first and second stories. 1950s and 1970 brought further interventions and the most recent renovation (at a cost of almost 6.670.000 Czech Crowns) took place in 1995 and 1996. 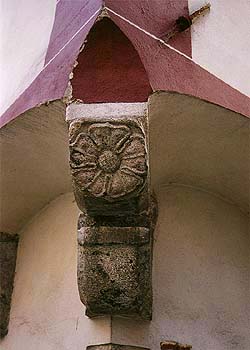 Significant Architectural Features:
Remarkable are the elements of the late Gothic interior layout (vertical constructions, vaults, fragments of window lining, ancon), further enriched by Renaissance modifications (vaults). Hall with a stairway with a groin vault, the rear rooms have barrel vaults with caps. Above the entrance room, there is a room with barrel vault on the second story, the corner room has a lowered ceiling decorated with a lacunar. The stone cellars under the front of the house have barrel vaults.

History of the House Residents:
The first recorder owner is Mikuláš Kornefl with his wife Kateřina in the beginning of the sixteenth century. Mikuláš died in 1519 and his son Valentin was expected to take over the house. However, that did not happen, as during the 1520s, the house was inhabited by Jeroným Šifil known as Kornefl because of his predecessor. In 1529, Šifil sold the house to Rosenberg clerk Petr Pergar. In 1529, Pergar bought yet another house, No. 12 on the square, where he then lived and sold the Latrán house to tailor Toman. During the 1540s and the first half of the 1550s, hostler Antonín lived here, followed by mason Gabriel Sinat who died in 1559. The next owner was Michal Mazouch who sold the house in 1573 to the castle captain Jetřich Slatinský ze Slatinky and his wife Kateřina of Turový. Slatinský reconstructed the house in 1588, as evidenced by a conwing between him and neighbor Adam Perner in regard to walls between the two houses, roof and eaves. Slatinský, who also acted as the overseer of reconstruction work on the Český Krumlov castle, died in 1591. He did not a wife or children and stated in his will that the house should be given to his loyal servant 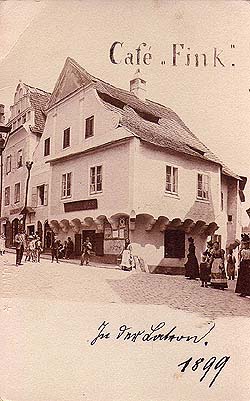 Blažej Marchal and his wife Anna. His granite tombstone bearing the Slatinský coat-of-arms and a Czech inscription is a part of the outer wall of the chaplain\'s house. The new owners did not enjoy the house for long. Blažej Marchal died in 1593, his son Jakub in October 1594. In 1599, Anna Marchalová exchanged the Latrán house with pouch-maker Ondřej Gartner for his Klášterní No. 52 house. Ondřej Gartner lived here with his wife Voršila until 1620 when he died. Pavel Hartinger lived here afterwards, followed by Daniel Hartinger in 1630. Jiří Fleischer owned the house between 1671 and 1696, followed by Ferdinand Hofsass who owned it until 1751. Tawer Antonín Wessnitzer lived here after Hofsass and then cloth-maker Antonín Wernhart moved in. His family lived here until 1827, when Václav Lang and his wife Sidonie bought the house. Records from 1654 show that there was a beer tavern in the house at that time and since the first half of the nineteenth century, the house has always been a restaurant, café or a pastry shop. Café Fink, frequented by the famous painter Egon Schiele used to be here in the beginning of the twentieth century. 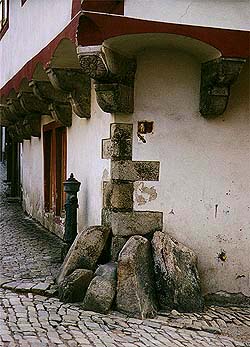