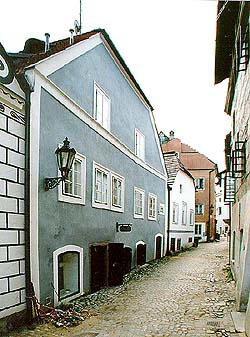 Description of the Building:
Two story house with a smooth-surfaced facade and a hemicycle gable. There is a large stairway hall with net vault on the left side of the ground floor, narrow barrel vaulted corridor leading into a courtyard and similar vaulted space on the right side with caps. The courtyard facade has a wooden hemicycle gable. There is an insignificant narrow wing in the courtyard.

Architectural and Historical Development:
This is a Gothic house that was rebuilt during Renaissance (last quarter of the sixteenth century) - see Archeological research in Český Krumlov. The ground floor disposition is modern. The facade was modified during the second half of the eighteenth century. The courtyard wing probably dates back to Classicism, the second story was added in 1863. The building recently underwent reconstruction.

History of the House Residents:
The first known owner was a man named Šurer, and then in 1546 a cloth-maker Vít. Gatekeeper Linhart lived here from 1575. Court butcher Bartoloměj Streintz bought the house in 1640. However, the 1654 house registration states that the house is empty. Assistant bookkeeper at the prince\'s court Jan Jiří Ekstein lived in the house from 1658 and left unexpectedly in 1664. The Streintz family returned to the house and lived there until 1706. Assistant overseer of the granary Jindřich Drőschel moved in during 1706. The house was used for the leather cutting trade since 1726. At that time, the house belonged to Josef Schweder, and from 1739 to another leather cutter Antonín Nussbaum. His family lived here during the first half of the nineteenth century.

Present Use:
Residential building. The insurance company Česká kooperativa has an office on the first floor.