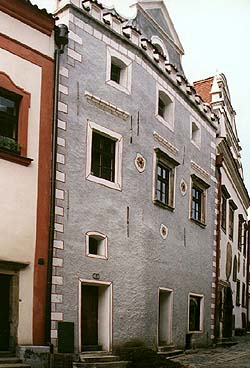 Description of the Building:
Two story building with colored plaster quoins on the sides, multiple painted coat-of-arms and volute gable with tympanum.

Architectural and Historical Development:
The house was built in the late Gothic period (before 1500). Even though it had been rebuilt during the eighteenth century, late Gothic and Renaissance architectural elements remain preserved. The Renaissance front of the house is divided by colored plaster quoins on the sides, multiple coat-of-arms and Renaissance hood moldings. The attic is topped with a pinnacle and a Classicist volute gable with tympanum. Some of the rooms on the second story have Renaissance vaults. Mason Petr, who owned the house, is the author of the late Gothic modification of the facade (probably before 1557).

Significant Architectural Features:
Three pieces of coat-of-arms with a golden Rosenberg rose, Renaissance cornices and volute gable with tympanum from the Classicist period. Renovation of the facade and reconstruction of the house was carried out in the beginning of the 1990s. The house was renovated in 1952. 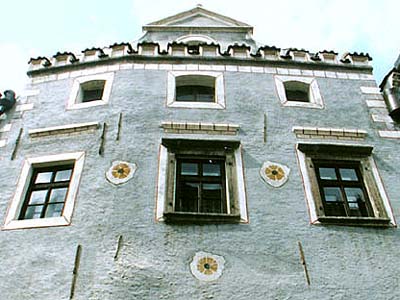 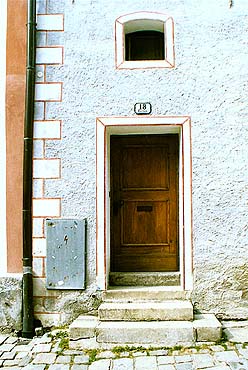 History of the House Residents:
The first known owner of the house was the shoemaker Prokeš in around 1500, followed for a short time during the first decade of the sixteenth century by Václav Bumba. Shoemaker Pavel lived here from approximately 1510, and goldsmith Kilián during the 1540s. In 1550s, the house belonged to mason Petr, who sold it in 1557 to tailor Ondřej Jon. Schoolmaster Michal Cromerus (Chromý) bought the house in 1572 after Ondřej\'s death. Barbora, the widow of Cromerus, sold the house in 1583 to Kašpar Paumgartner, who died in 1585 or 1586. His wife Anna married baker Florián Hauzenpergar. After Anna died, he married a woman named Marta. He paid off the house in 1604 and sold it in 1608. We do not know much about the seventeenth century inhabitants of the house. In 1704, the house became a bakery when Antonín Lepší moved in. The next owner was also a baker - Vít Fencelík. The family of baker Bartoloměj Babor owned the house from 1780 to 1839.