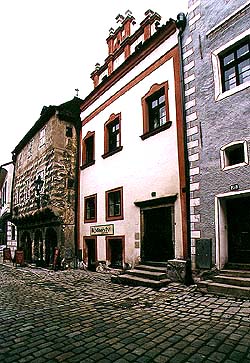 Description of the Building:
Large asymmetrical plot with a main building, rear wings and a central courtyard. The front of the house is Classicist from the last quarter of the eighteenth century, with square Renaissance entrance portal and Renaissance attic. The first story of the main building has two wings, and there is a narrow corridor on the right with cross vaults and rich Renaissance mural paintings dated 1548. The remaining spaces on the left of the courtyard have smooth-surfaced ceilings and possess no architectural value due to later modernization. The right courtyard wing contains a space with barrel vaults and caps. The second story has a Renaissance interior layout and vaults in all rooms. There is a gallery standing on oval arches on the second story which surrounds the courtyard.

Architectural and Historical Development:
The main building dates back to Renaissance, but the folded plate of the front provides evidence that even older stones were used in the construction. The spatial arrangement and the gable date back to approximately 1548, i.e. the year the frescos on the first story were made. The lowered vault on the second story is probably from the seventeenth century.

Significant Architectural Features:
The hall with murals is exceptionally valuable.