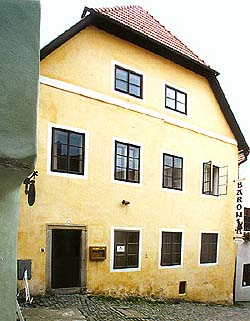 Description of the Building:
It is a one-storey house built in the recessed part of the broken street line of Kostelní street. The front is flat, articulated with four symmetrical window axis, and finished with a half-gable. On the ground floor is situated a stone portal with a skived edge. Along the back elevation there is a terrace on the ground floor and a gallery with wooden rails on the second floor, facing the river. There is an attic on the ground floor. On the ground floor at the front is situated a barrel-vaulted hall with lunettes, the back part is vaulted similarly but without lunettes. It abutts on the back elevation, which is created by a wall 170 cm thick. All rooms on both floors have flat ceilings.

Architectural and Historical Development:
The building probably originates from the Gothic period. It was added to the town wall, which has been preserved on the ground floor. Further changes were carried out in the period of Classicism, when the vaulted sections on the ground floor were created. The attic was built up in 1936 together with a new roof truss. In 1960 a reconstruction was held and it completed the work of destruction of the house. The rest of the original construction and historical elements were removed. Further reconstruction of the house in its present look was carried out in the years 1994 - 1996.

Significant Architectural Features:
In the panorama of the town there is a nice view of the back elevation of the building with the galleries. 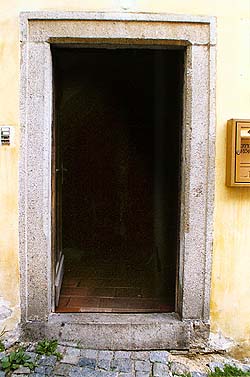 History of the House Residents:
This house, called "below the school", belonged to the Poláks at the beginning of the 16th century. Widow Anna sold it in 1517 to a draper Ambrož. In 1518 the house was owned by Jakub Kempsecar and after his death it was taken over by a draper Šebestián Freismut, who married Jakub´s widow. His son sold the house in 1580 to a card painter Jeremiáš Lotter. The Lotters lived there until Jeremiáš´s death in 1611. Further owner of the house, Petr Turner, who stayed there to 1624, was also a card painter. He was followed by Valentin Houska, whose wife Marie Anna Houska took the house over after his death. Before 1659 the house was obtained by Jan Nigrin and after that a stationer Egid Hilbert stayed there. Veronika Hilbert is mentioned as the owner of the house to 1671, when a shoemaker Bernard Bolss moved there. In the years 1686 - 1798 Kryštof Hart and Ignác Wolf ran a rope-making trade there. From 1798 a bricklayer Jan Pritsch lived in the house and from 1802 to at least the 1840\'s František Gründer stayed there.

Present Use:
On the ground floor is presently the restaurant Baron, on the upper floors there are two flats and an office. Estate Agency DHW s.r.o.