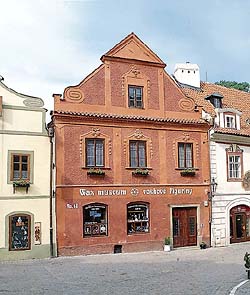 Description of the Building:
A one-storey building with a three-windowed-axis in a Classical front, finished with a volute gable with a tympanum. The windows are stressed with moulding and stucco flower decorations. On the facade a metal house sign is fixed in the shape of a Greek cross. The disposition of the house contains a carriage way on the right hand side, where a staircase to the upper floor is situated. The layout of the ground and first floors consists of two aisles with flat ceilings. Above the back part of the ground floor room was discovered a carved Rennaissance joist ceiling. There are cellars under the left part of the house along the street. On the right, near the edge of the land parcel, there is a semicular barrel vaulted section facing the yard, opened with two arcades. In the back wing of the house, limited by a preserved town wall are barrel vaulted rooms.

Architectural and Historical Development:
The land parcel is of medieval origin. The first documented building built on this sit was of Rennaissance origin, according to the type of single constructions. The house reconstruction in its present appearance probably originates from the age of Classicism. The back wings are Baroque and the extention is modern, built after 1900.

Development of facade:
No findings from the Middle Ages were discovered. An illusion painting is thought to have decorated the whole facade during the Renaissance period (plant decoration has been uncovered in several places). In the early-Baroque period the gable was built and the facade was adapted, as it can be seen today. The plasticity of ledges and vertical lizens with caparisons completed the illusory articulation of the gable - some volutes, lizen scheme and window shams. Originally a grey-and-white coat of paint was used again. The Classicism plaster modification completed the facade form. Some typical decoration elements of window holes were used, for example, band shams with terracotta volutes, tassels and shell shapes. The plasticity lizen scheme with volutes appeared on the gable. Later, only a parterre was adapted, the neo-Renaissance illusion modification with a pyramid shape and hipped-pyramid design from the turn of 19th and 20th century is remarkable. During the years 1999-2000 there were some extensive changes of the Classicism plasters. The facade was restored and covered in a red-and-brown coat of paint.

Significant Architectural Features:
A yard, skirted with arcades, a Rennaissance joist ceiling with partly preserved decoration on the ground floor. 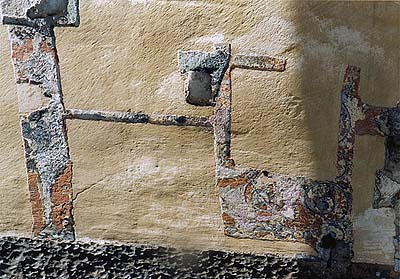 History of the House Residents:
In the 16th century the house was often called "the House at the Pool". Its first owner from the first decade of the 16th century was a maltster Mikuláš, also known as Mikuláš at the Pool. Mikuláš lived remarkably long for that time, he was a member of the town council in 1516 and died in 1553. His widow Barbora married a maltster Pavel Hiliprant, who took over the house and the trade. He married again after Barbora´s death and the house was inherited by his widow Dorota. The house was handed down in the family to 1596, when Anna Kiersch, a widow after a potter Jan, sold it to the family of Neubauer, who sold it further on to a town scribe Matyáš Rulle before the end of the century. At the beginning of the 17th century Rulle became an administrator of Krumlov town mines, and in 1613 from this post he insulted the town council as well as the chairman and members of the Czech chamber, which looked after the Krumlov dominion of the Czech king. He was put in prison at the Prague castle. He had to apologize to all those mentioned above, then he was released from prison. In 1615 he sold the house to Adam Kroupa z Renštejna. In the 1630s a weaver Albrecht Grill came to the house, followed by a maltster Petr Peschl. The following owner of the house, Havel Řehoušek, was also a maltster. From 1673 it was owned by a court teacher of ball games Jan Řehoř Mayer. In 1729 a baker Augustýn Pfeffer stayed there. In the first half of the 19th century the house belonged to the family of Reitinger. 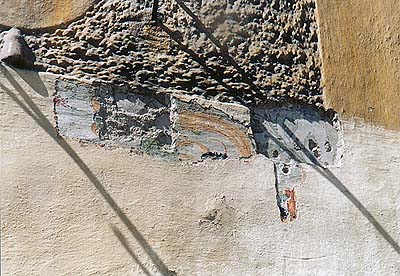 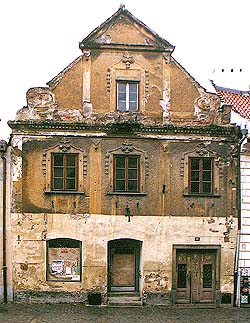 Stories And Other Interesting Information:
In around 1460, a copper-smith Hollenhammer was living in the house. He bought old copper from a Jew then made things from it. Once a piece of copper did not melt in the smelting furnace. It was a cross which was then handed down from father to son. In the mid-17th century the last of the kin, a widow Reikin, gave the cross to a councillor. There were severe storms with hail in the region in that time. The town councillors decided to place the cross on the hill where the bad weather seemed to be coming from. Since then the hill has been called Cross Hill, but the origin of the cross is in this house.

There used to be an inn here with a stable. The man who took care of the horses was wicked, and often tormented them. Once a guest of the inn placed a very beautiful horse there, and the man was eager to torment the animal. But the horse defended itself and injured the man who consequently died in the stable without help. His crying is sometimes heard in the place where the stable used to be.

The house had beautifully vaulted ceilings with a break-neck staircase, which became the fate of one of the waiters. At a moment when he was very happy because his beloved Klárka had agreed with him for a wedding, he fell down the stairs and broke his neck. Klárka could not stand it and went mad, so sometimes she and her fiance appear there. Their souls have not found peace in eternity.