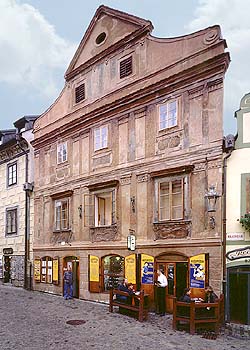 Description of the Building:
A one-storey house with a right and left court wing. The broken front of the building originates from the mid 18th century while elements of older renovation style were used (hood mouldings and moulded window frames). A false attic floor was built with a rectangular gable, finished with volutes. The layout of the ground and first floors creates a lateral two-aisle. The front aisle has flat ceilings on both floors while the rear aisle, which is not as deep, has barrel vaults on the ground and the first floors. The building has a saddle roof, finished in the direction of the yard with a keel with the original, probably Rennaissance construction of the roof truss.

Architectural and Historical Development:
The building does not seem to be of homogenous origin, probably built on a place of an older house. In the Rennaissance period two aisles of different depth were created. The layout of the house was changed in 1874 when the right court wing was added. The disposition and the renovation of the facade originates from the period of Classicism.

Development of facade:
Only a rough-smoothen plaster layer appeared in fragments from the Middle Ages. There were not any plaster discoveries from the Renaissance period. Stone jambs at the first-floor level may have been fixed in during that period. The facade was newly adapted in the Classicism phase. The whole front was articulated with flat pilasters finished by cordon ledges. Window holes at the first-floor level are articulated with band shams, older above- window ledges and window-ledges fillings with palm leaves all over the sides. Window-ledge sets of small bars decorate the windows at the second-floor level.

Only some pilasters, volutes with a triangle-shape extension articulate the gable. The ground floor was adapted by band rustic-work. The oldest coloured articulation: red-and-white. The present ground floor fillings were installed during the restoration of courtyard wing in the second half of 19th century and the ground floor rustic-work disappeared. It is the first facade in a town of Cesky Krumlov where the preservation method was used in 1996. The facade was not even covered with the new unified paint. Only some plaster retouching was done. Some older coats of paint can still be seen on large facade surfaces. The only defect of it is an unreal scheme of the parterre done by ashlaring. 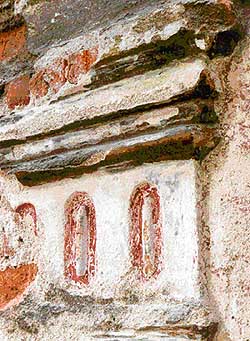 History of the House Residents:
The first known owner of the house was Pavel Komínek, mentioned there in 1513. After his death the house was inherited by his wife Kateřina, who sold it to Bastl Brymbur, who was a town councillor in the 1520s and the 30s. In the 1540s and 50s the house belonged to Pavel Štětka, who also held the post of a town councillor. After his death the house was obtained by his family and the widow Barbora remarried. In the 1590s the house was bought by a manorial burgrave Jan Louta. In 1620 Louta´s widow sold it to Jeroným Ditmar with the right to live there until her death. From 1646 a shoemaker Kryštof Hölzel lived there, followed by a maltster Mikuláš Peschl in 1652. In the early 1670s the house belonged to a butcher Eliáš Madrin. After that in 1675 a court maltster Urban Postl moved there. From 1696 a draper Valentin Pekh lived in the house. In the years 1756 - 1824 it was owned by a butcher dynasty of the Streintz.

Present Use:
The building presently houses the famous Český Krumlov hotel and restaurant Hotel and Pub Na louži. The floors are used as hotel rooms.