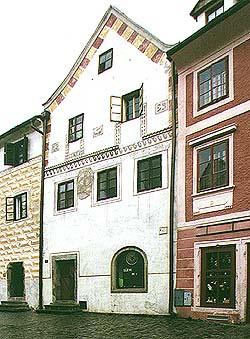 Description of the Building:
A two-storey house with two axes and a triangular gable. The street front is decorated with sgraffito and the gable with simple two-colored band painting. The ground floor is divided into two aisles, and there is an individual hall with one field of diamond vault and two fields of ridged vault. You enter the house on the ground floor through a rectangular stone portal with skiving on vertical sides. We can see that the gable and a part of the second floor were added later. The modern rear elevation of the building has three floors, on the ground floor there are segmental arches vaulted to the transverses.

Architectural and Historical Development:
The house was originally linked with a building on the neighbouring land parcel, but in 1557 the houses were separated. The house was built up in its present appearance with unique vaults and a sgraffito front. It was built in the town wall, which was completely removed during a reconstruction that we know nothing more about. The last additional work was done in the house, especially in the rear section, after 1912, when one aisle was added in the direction of the river. In 1960 a complete reconstruction and modernization was done. In 1996 a reconstruction of the ground floor, cellars, sgraffito facade and the roof was carried out.

Significant Architectural Features:
On the ground floor of the house there is a unique hall with one field of vaults and two fields of ridged vault with edges decorated in red colour. 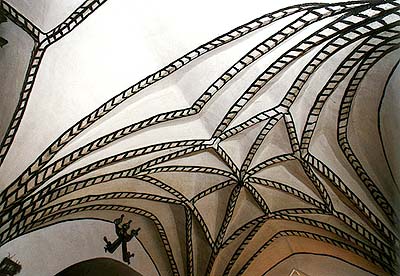 History of the House Residents:
The house was a part of a neighbouring building at Kájovská No. 62 until 1567. In 1567 it was bought by a baker Ruprecht Kirchhamer from a tailor Pankrác Fischer for half of the house No. 62. He reconstructed it into a detached house. At the turn of the 1470s and 80s, the house belonged to a baker Bartoloměj Pér. The Pérs ran their baker trade and lived there even in the first decade of the 17th century. Before the middle of the 17th century the house was shortly owned by an Eggenberg scribe, later a burgrave and a district administrator of Krumlov castle Petr Schloot. From 1656 a court official Kašpar Kunkl stayed there, followed by a butcher Jakub Klampfl three years later. From 1676 the family of a town miller Řehoř Postl lived in the house and after them another town miller Matyáš Matuna from 1694. In 1712 a miller Matyáš Klimeš moved there and his son, a barley-dealer František, lived in the house to 1776. We can find millers there even in the first half of the 19th century.

Photographs:
In 1996 complete photo documentation was made showing the outer state of the building before and after the reconstruction of the facade.