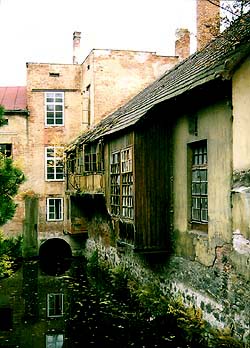 Description of the Building:
A complex of factory-type buildings with an elongated ground plan, situated on an island, around which flows the river Vltava with a mill race. The eastern end and the abutting part have two storeys, the rest has only one storey. Near the western end there is a wooden shelter and above the mill-race is situated a one-storey wing, originally with a wheel. Except for a jetty on two consoles at the south-eastern corner of the building, facing the river Vltava, the complex is not historically remarkable. All the sections have flat ceilings, joist ceilings or ceilings vaulted to the transverses. There is a saddle roof and above the two-storey section is a terrace. Along the mill-race is situated a wooden gallery. A chimney shaft raises up from the saddle roof.

Architectural and Historical Development:
Although the eastern core of the complex originates probably from the beginning of the 14th century, the extent of its constructions on the ground floor level probably belongs to the Rennaissance period. A dyer´s house was added during the 18th century. In the same century from 1791 - 98 a fulling mill was reconstructed. In 1869 the old dyer´s was knocked down and a new one built on its place. It was rebuilt in 1880. A year later the fulling mill was reconstructed again, one floor was added to the eastern part of the dyer´s, and it was linked with the original fulling mill. A chimney was added in 1896. In 1900 or so, the western building was constructed and an aisle with a mill-race was built. In 1941 the second floor was added.

Development of facade:
There were not any discoveries from the Middle Ages. In the Renaissance period a one-floor building without any decorative elements, covered in a white-and-red-coloured coat of paint appeared. 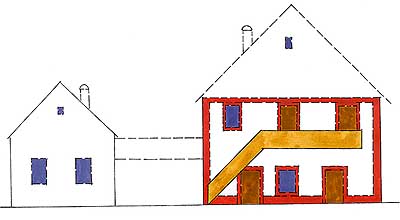 In the first half of 19th century a bay was fixed in at the first-floor level and linked to an older built-on gallery. 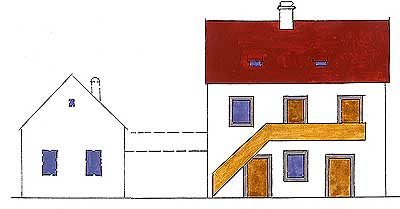 In 1869 a dye-works was built on to an already existing fulling mill. 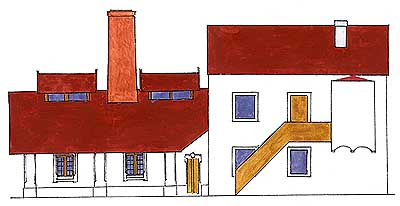 In 1880 , 1881 the premises were extended in a considerable way: a new dye-works building and some particular fulling mill improvements. The facades were articulated with a grey-and-green-coloured scheme. 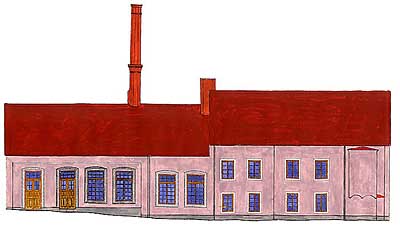 In 1890s the dye-works, with connection to some working changes, was designed up to the today´s form with a flesh-coloured hue used on the facade. Around the year 1200 they built on the second floor at the fulling mill and a wing above the mill-race, as it can be seen at present. The whole area was covered in a green or white-and-green-coloured coat of paint. 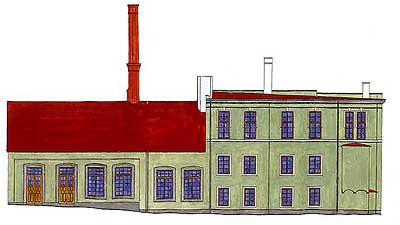 In 1930s the restoration of dye-work was done, and the whole area was covered in ochre-coloured paint.

Significant Architectural Features:
The Classical jetty in the eastern part of the building. 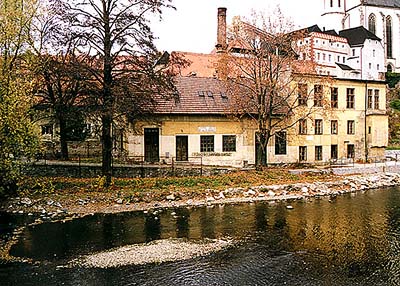 History of the House Residents:
The beginnings of the house are not documented. Draper´s trade belonged from the beginning to the basic production and social components of every mediaevel town. The fulling mill, an indespensable part of production, was registered in this place all during the 18th century. The mill below the chapel of St Václav is documented in 1347 and in the same year the Rosenberg fulling mill is mentioned. We can estimate that the fulling mill was here even in the 14th century. 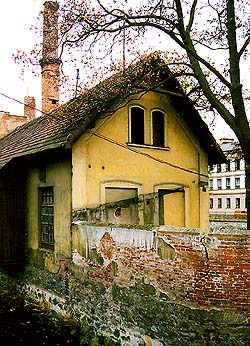 No factual information pertaining to it in the 18th century has been found. The local municipality looked after the fulling mill, and it saw plenty of smaller or larger repairs due to floods and ice-breakings. In the 18th century the capacity of the fulling mill, not used by drapers, was used by stocking-knitters and dyers. Because of the inconvenient capacity of the fulling mill, there was a new fulling mill built near the municipal mill in 1787. In 1790 the leaders of the draper´s guild J. Bönesch and J. Postulka asked the magistrate for a quick repair of the fulling mill or to sell it to their guild. The magistrate sold it to the guild in the following year for 350 guldens and a yearly rent of 50 guldens. During the 19th century the guild changed into a cooperative of producers, according to the new capitalist orders. In 1869 the chair of the cooperative, František Vocelka, had the old fulling mill knocked down and built an extention towards the bridge, with the same purpose. In 1881 brothers František and Robert Vocelka acted as exclusive owners and had the fulling mill together with the extention reconstructed and modernized. The water drive was replaced by steam in 1896. The factory worked until 1929, when it closed due to an economic crisis. Then the front section with the core of the old fulling mill was bought by a carpenter František Pils, the back section by a corn storing cooperative. The owner of a waterwork company Adolf Praxl rented the ground floor workshop in 1935. In the years 1937 - 1941 František Pils reconstructed the house. On the ground floor are two carpenter´s workshops and on the upper floor are habitable rooms.