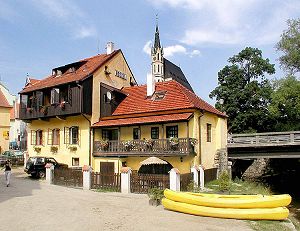 Description of the Building:
A ground floor building with a modern front. The ground floor section above the street level contains rooms with flat ceilings which are historically uninteresting. But the cellars on the bottom level of the river bank are of a great historical value. While the western smaller part contains imperfect cross vaults of probably Classical origin, the neighbouring section is vaulted with brick barrel vaults at the front and barrel vaults with oval fronts in the middle. The rear part of the cellars is vaulted in the same way. The middle and rear parts are situated under the street.

Architectural and Historical Development:
The stone cellars of the houses No. 57 and No. 59, situated under the street, are the remains of a medieval stone bridge, which as a part of the town fortification system probably preceeded a hoist bridge of the outer gate, and linked the banks of the Vltava river. Both buildings are of modern origin. According to a township map from 1826, no building existed there before. Later three houses were built, which were knocked down in 1868 to make room for a modern ground floor building, built aside the street line, which was separated into two detached houses in 1868. At the same time an upper floor was added to the northern building.

History of the House Residents:
From 1612 gate-keepers used to live in the house at Kájovský bridge, later a flat of a municipal policeman was here. 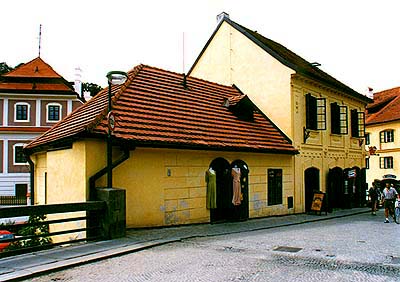