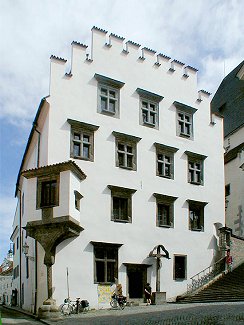 Description of the Building:
This two -story corner building is situated on the lower end of the sloping terrain of Horni Street. The main facade of the building does not face Horni Street, as do the other buildings in this row along Horni Street, but rather faces Svornosti Square. The left side wall is in line with the front facade of its neighboring building on Horni Street and the right side wall faces the Church of St. Vitus. On both the main facade and right side facade there are Gothic-Renaissance circular tracery windows with stone window jambs. In the semicircular tympanum above the entrance portal of the main facade there is a large plaque with an engraving that commemorates the construction of the building in 1520 which was led by Václav z Rovného. To the left of this portal there is a gravestone of a baker named Matyas Plankel, which has the symbol of the baker\'s guild (the pretzel) on it. Next to Martin\'s gravestone is the gravestone of his daughter Anezka . Both Matyas and his daughter lived at Svornosti Square no. 15. The other gravestone that is located on the chapel belongs to the burgomaster and town councillor of Cesky Krumlov, Lord Jetřich Slatinský ze Slatinky. His gravestone is engraved with the text "In the year 1591, here lies the noble Jetřich Slatinský ze Slatinky, well-known servant of the Rosenberg family and some time sheriff of Cesky Krumlov, 12th of December." A noteworthy element of the main facade is the bay which protrudes out from the corner of the building at a right angle. This bay is supported by an engaged column that has got a spiral design engraved into it. Under the windows sills on the bay, there is the symbol of the Rosemberg family, the five-petalled rose. Gothic stone window jambs are well-preserved on the northern, street side facade. The floors of the interior of the building have got similar layouts. On the ground floor there is a hallway with tracery vaults and, in parts, well-preserved brick vaulting with intersecting brick ribs. The vaulting in the hallway on the first floor is similar to that on the ground floor, and is well-preserved. Next to the hallway on the first floor, there is a chapel with star vaulting. The remainder of the spaces on the first floor and the ground floor have got either Renaissance barrel vaults or flat ceilings. In addition to all of the vaulting that remains in this building, the original scullery is also well-preserved on the first floor. In many of the rooms throughout the building there are ridged, Gothic portals.

Architectural and Historical Development:
The original Gothic structure was reconstructed in 1514-1520, at the request of Rosemberg chancellor Vaclav of Rovneho. It was at this time that the building received its late-Gothic, early -Renaissance appearance. The Chapel is noted in literature as the first step of the entrance of the Renaissance style of architecture into Krumlov. Significant repairs were made after 1923, when the original Gothic gable walls were taken down.

History of the House Residents:
The chapel building was first established as the site of the Cesky Krumlov chapel from 1514-1525 under the leadership of the Rosemberg chancellor Vaclav of Rovneho. The original, older chapel was located up until the mid-16th century in the building that is presently no. 168 Kostelni Street. A baker named Kral was the last owner before it became the chapel. After his death, the building was acquired by Lord Petr IV of Rosemberg, who then sold the building to Vaclav of Rovneho, who donated the building to the Krumlov curates in 1499. After fourteen years however, the original building seemed to be too small for the seven curates who lived there at that time and it was then that Vaclav of Rovneho decided that it was time to remodel the building. He bought a neighboring building from widow Katerina Promarova for 170 three-scores of groschen and in return sold her the building across the way, presently no. 145 Horni Street. Promarova´s building was demolished and in its place a new building was built from 1513-1518. This new space was used for the chapel of St. Paul, rooms for guests, for servants, rooms for the sick, and for supplies. This building was also a donated by Vaclav of Rovneho and was in the hands of the curates from 2nd of November, 1518. The deed of covenent to this building was then given over to the Krumlov church on the 2nd of November 1518. The parishoners specified in their deed that they could decide who would live in each room and, as well as, what the fufillment of the debt for the rooms would be. The closing of this document condemned everyone who would harm the house or its inhabitants to eternal damnation in hellfire side bz side with all other heretics such as Judas, Viklef, Jan Hus (John Huss), and Jan Žižka (John Zizka). From 1666 the chapel was in the hands of the community. In 1689 a cast iron bell was created for the chapel by Pavel Jiri Haag. In 1803 the fireproof room where the registry was kept was built. In the Chapel of St. Paul, which was later open to the public, religious services also took place like for example the brotherhood of the Virgin Mary, founded in about 1653.

Stories And Other Interesting Information:
Václav z Rovného bought the house and gave it to the parish of the St. Vitus church. The condition he set, however, was that after the death of the original owners, the holy mass for the dead must be held every year. Everything was signed and agreed upon, but it sometimes happened that they forgot to read the mass, and they could somehow never be sure. Then not only the kaplanka was haunted, but the church as well. As soon as the mass was read, everything then quieted down.